MoCo Council's war on the homeless spreads across the pond 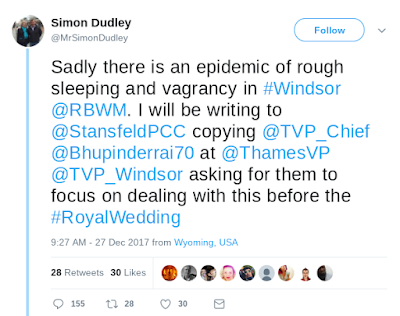 The Montgomery County Council's war on the homeless, including a proposal to ban panhandling, appears to be contagious. A British official is demanding the Thames Valley police remove homeless people from the streets before the royal wedding of Prince Harry and Meghan Markle, scheduled to take place on May 19 at Windsor Castle.

Our County Council has set a similar deadline. Claiming they will end homelessness by housing every single homeless person by December of this year, they conveniently are seeking to pass laws criminalizing homelessness, in an apparent scheme to drive the homeless away - - to make it appear they were successful.

But what's so interesting about the British case, is that Royal Borough of Windsor and Maidenhead Council leader Simon Dudley's talking points are almost identical to those of our Montgomery County Council. "A large number of adults that are begging in Windsor are not in fact homeless," Dudley wrote to police, "and if they are homeless they are choosing to reject all support services ... In the case of homelessness amongst this group, it is therefore a voluntary choice.”

The Montgomery County Council, during their last attempt to pass the panhandling law, claimed that the homeless asking for money in Montgomery County are actually "professional panhandlers" who travel here from outside the County each day. They provided no evidence to support their claim. A national non-profit organization condemned the County's proposal at that time, writing that the Council was trying to "criminalize homelessness."

Similarly, homeless advocates in Windsor blasted Dudley for his claims. “For someone to ask for loose change, your self-esteem is at its lowest," Murphy James of the Windsor Homelessness Project told The Guardian. "No one does this from choice. We shouldn’t be demonising these people, but asking them what we can do to help.”

A public hearing will be held on the panhandling ban on January 30 at 1:30 PM at the County Council Office Building.
Posted by Robert Dyer at 10:56 AM