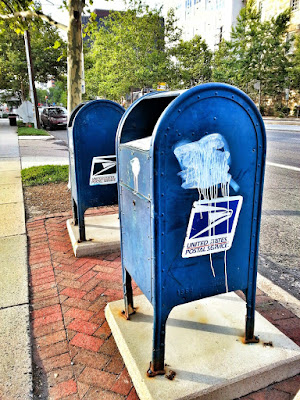 Rockville's Mayor and Council are considering a recommendation by the city's Board of Supervisors of Elections to allow residents to vote in city elections by mail. A public hearing on the proposal will be held on Monday, February 5, 2018 at 7:00 PM. Anyone wishing to testify at the hearing should call 240-314-8280 before 4:00 PM on February 5.

Only 15.87% of voters participated in the last city election in 2015, and that number has steadily declined over several consecutive elections. Some believe that mailing ballots to voters will increase participation.

Voters would sign an affidavit on the outside of the mailing envelope, which would have a trackable bar code on it, and then mail it back. Ballots could also be dropped off in-person. Switching to voting-by-mail could eliminate the costs of personnel and voting machines during elections.

Considering how many pieces of mail get lost, I would hesitate to vote by mail myself, out of concern that my vote would wind up in somebody else's house, or in the gutter (both have actually happened to me). I would probably return it in-person to make sure my vote counted.
Posted by Robert Dyer at 9:40 AM