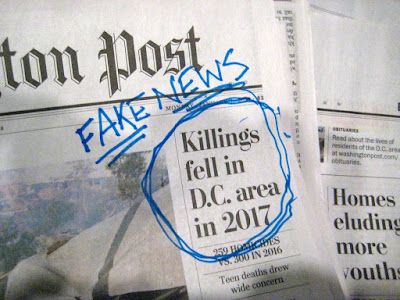 Long considered a low-crime jurisdiction, Montgomery County experienced a 31% increase in homicides last year.  Surprisingly, the Washington Post chose to run a "fake news" headline Sunday. A front-page splash read, "Killings fell in D.C. area in 2017." Only those who bothered to read the article on the inside pages would learn that murders actually increased in Montgomery County in 2017.

It appears the Post used the misleading headline to protect the soft-on-crime Montgomery County Council, who have proven impotent to stop the surge of violent crime in the County. While murders spiked in Montgomery, Fairfax had no increase, D.C. had fewer, and Prince William County's homicide rate plunged from 22 to 4. Increasing crime has so embarrassed Montgomery County elected officials, they have resorted to violating the County's open data law, by sabotaging the crime datasets.

A month-long crime data outage last summer only ended after I publicized the illegal blackout. Then block numbers were removed, making the data nearly useless for lengthy roads. Next, they restored block numbers, but disabled the sorting function of the date columns, so that you can only access random crimes from 2016 no matter which option you select for starting or ending date. Finally, as of this morning, I can no longer use the mouse to slide the columns right or left, only the keypad on my keyboard.

Ironically, the jurisdictions whose homicide rates declined last year provide more and more-accessible crime data to their residents than Montgomery County. We need new elected leadership that can stop the trend of rising homicides, not one that resorts to childish tactics like blocking crime data from the public. Sad!
Posted by Robert Dyer at 8:00 AM