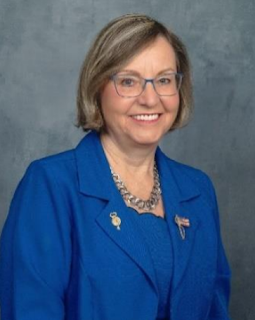 Twinbrook resident and former Rockville planning commissioner Brigitta Mullican announced her entry into the 2019 Rockville City Council race yesterday. She cites her extensive community service resume among her qualifications, including being a founder and past President and Vice-President of the Rockville Sister City Corporation, VP and secretary of the Twinbrook Citizen's Association, and member of the Richard Montgomery High School PTA and Booster Club.

Mullican is a graduate of Richard Montgomery, and an alumnus of Montgomery College and the University of Maryland, from which she earned a management degree. She says she will use her experience of working with government officials at all levels to "improve Rockville’s working relationship with both the county and state governments."

Among the issues Mullican plans to campaign on are school overcrowding, increasing the number of City Council seats to seven, and traffic congestion. She endorses Gov. Larry Hogan's plan for Express Lanes on I-270 and the Beltway. While she pledges to help small businesses in the city, she has misgivings about the appearance that elected officials are offering "selective bailouts" to some struggling businesses like Dawson's Market, but not to others.
Mullican joins two other candidates who have declared for the Council race. Cynthia Cotte Griffiths is the Richard Montgomery High School's Parent Teacher Student Association (PTSA) President and editor of the former Rockville Central blog and Facebook page. With an extensive professional background in non-profits, she is currently Executive Director of DC-MD Justice For Our Neighbors in Rockville. Her top issues include transit-oriented development, economic development, pedestrian and bicycle safety, and requiring the Mayor and Council to appoint a new member if a vacancy opens.

Cotte Griffiths has been a commissioner on the City of Rockville Traffic and Transportation Commission since 2015, a past commissioner on the City of Rockville Human Service Advisory Commission from 2008-2014, a member of the 2009 City Boards and Commissions Task Force, a member of the City's Sesquicentennial Committee, and won a Good Neighbor Award from the City in 2006 for volunteer efforts in the community and at Ritchie Park Elementary School.
James J. Hedrick is a member of the board of Rockville Housing Enterprises, and a Rockville resident since 2014. He is currently a Federal Housing Finance Agency (FHFA) employee, and serves on the Executive Committee of the Twinbrook Citizens Association. After starting his career at the U.S. Department of Housing and Urban Development, Hedrick worked as a consultant to local governments for several years. His firm advised towns and cities on budget, staffing, services, and strategic planning. He says he hopes to bring this experience to the Council.

Hedrick's top issues include better mobility connections among the different parts of the city, economic development, more diverse representation on boards and commissions, and environmental sustainability.

Expect the field to grow, and if you enter the race, send your press releases throughout the campaign season to Rockville Nights.
Posted by Robert Dyer at 9:51 AM