The Montgomery County Council is proposing to raise property taxes in the FY-2021 budget. No councilmember has announced this publicly, but the planned tax hike was revealed in a newspaper announcement the Council is required by law to publish before raising taxes.

Despite the Maryland Department of Assessments and Taxation's guidelines to allow residents to testify live by telephone, the Council is currently not allowing residents to do so, despite the Council having used videoconferencing to promote themselves this week. Residents may only send written or emailed comments on the tax increase, or recorded audio/video statements, and have been banned from entering the Council Office Building since the coronavirus outbreak began in the county.

No one can yet predict the full economic impact of the coronavirus shutdown, but it certainly will be significant. Raising everyone's tax bills is certainly a bold move amidst a worldwide pandemic and economic collapse. 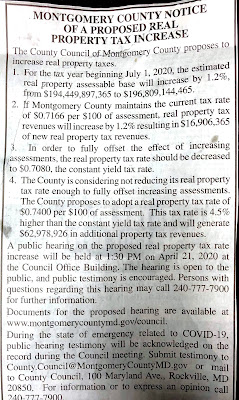 The Council has raised property taxes every year this past decade except in 2014, when they gave a paltry $12 average tax cut during an election year. In 2016, the Council raised property taxes a whopping 9%, which translated to 10 or 11% for a large number of residents, due to rising assessments. But the tax hike failed to generate the expected revenue. In fact, revenue is now declining, after many wealthy residents fled to lower-tax jurisdictions in the region.

Earlier this year, the Council sought new taxing powers from the Maryland General Assembly. They hope to be able to raise income taxes beyond the current limit allowed, and to add additional property taxes based on what category of property you own.

Montgomery County Republican Party Chair Alexander A. Bush called the proposed tax increase "obscene," noting the flood of unemployment claims being filed by County residents, and the many coronavirus-related business closures. Bush strongly urged the Council to allow testimony by telephone at the public hearing.
Posted by Robert Dyer at 10:55 AM