Metered on-ramps advancing for I-270 congestion 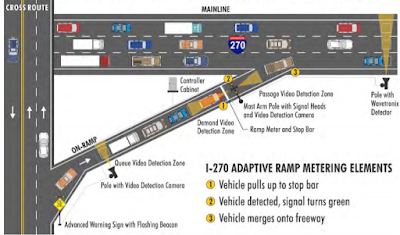 Despite the coronavirus pandemic, contractors for the Maryland State Highway Administration are pressing forward with Gov. Larry Hogan's congestion relief plan for Interstate 270. In contrast to the loud political arguments over Hogan's Express Lanes plan, his earlier modest upgrades to the highway have proceeded quietly. Now the signals and necessary electronics for another phase of the project - metered on-ramps - have been installed at many interchanges.
The signals will act just as traffic lights do, turning red and stopping traffic entering the highway's southbound lanes from on-ramps. Traffic engineers hope they will be able to smooth out the inflow of cars that must merge with oncoming traffic in the through or local lanes. Sensors will be used, and on-ramps will be widened to two lanes if the lines become too long with a single queue.
Drivers have already noticed other small changes with large impacts. Some on-ramps now allow you to stay in the lane you came in on (such as the on-ramp from Sam Eig Highway), rather than fighting to merge and slowing traffic, such as the on-ramp from Democracy Boulevard northbound. Surprisingly, Hogan has not trumpeted each completed phase with press conferences. Only vague "New Traffic Pattern" electronic highway signs give any indication when each part of the project is put into use.

The project is still only 48% complete. It is scheduled to be finished next summer, so we won't know the full impact - if any - before then.
Posted by Robert Dyer at 11:01 AM