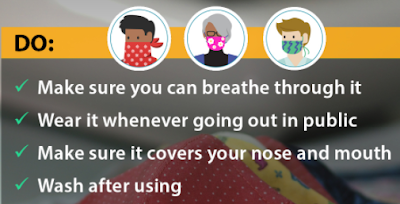 Once again a government official has had to step in to act during the coronavirus crisis while the Montgomery County Council dithered. Last evening, County Health Officer Dr. Travis Gayles issued an order requiring customers to wear masks when inside grocery stores, pharmacies and "large chain retail establishments," effective Monday, April 13, 2020. The order also requires these stores to limit the number of customers allowed in at any one time, and to facilitate social distancing through the use of floor markings.

Giant had already announced it would begin limiting the number of customers in its stores prior to Gayles' order being issued.

Gayles also ordered the affected businesses to provide clean restrooms stocked with soap and hand sanitizer for their employees, and to allow them to wash their hands every 30 minutes. He did not mandate face coverings for employees, but ordered that employers allow them to be worn. Physical barriers between customers and employees should be erected, Gayles said, and widely-used equipment like shopping carts should be cleaned, and wipes provided for customers to use to clean them.

Face masks are expected to be largely improvised or homemade at this point, as even cloth masks are selling out online and in what few stores carried them. Surgical and N95 masks were sold out online and in stores four weeks ago, and Gayles discouraged their use by non-medical professionals.

However, cloth masks, bandannas, t-shirts and other improvised masks do not have the same filtration and moisture controls that professional-quality surgical masks provide. Only N95s provide maximum protection in direct contact with individuals infected with covid-19.

Federal officials have repeatedly lied about masks from the beginning of the crisis. First, they falsely claimed that surgical masks would not reduce your chances of catching the virus. Now they claim going into stores looking like a bank robber provides the same protection as a professional surgical mask, again for the sole reason of not wanting to force mask manufacturers to produce enough for the general public and medical professionals. The government has known since 2002 that a pandemic like this was coming, and yet failed to stockpile and domestically produce enough masks to protect its taxpayers despite nearly two decades to prepare.
The County mask order, as a result, is simply an additional step that will reduce the spread of the virus, by reducing the airborne droplets generated by infected customers. Cloth masks will not hold in or keep out bacteria, viruses and contaminants to the degree that a surgical mask would. They are also heavier and more uncomfortable than lightweight surgical masks. And they become petri dishes themselves, as they have no moisture-retardant material like a medical grade mask.

"I fully support the County health order requiring people wear face coverings in grocery stores, pharmacies, and large chain retail establishments," County Executive Marc Elrich said after Gayles issued the order. But, in light of the limitations I referenced in the previous paragraph, Elrich urged residents to stay home as much as possible, and not forgo social distancing measures while wearing a mask.

This is yet the latest case of a government official having to take immediate action to protect the public while the County Council slept at the switch during the pandemic. Councilmembers spent so many days trying to get on television to promote themselves via their proposed mask bill that they had no time to actually pass the bill. Gayles finally stepped in to immediately issue the order. Last month, the Council and Montgomery County Public Schools leaders hemmed and hawed about whether or not to close schools, primarily for political and ideological reasons. Maryland Gov. Larry Hogan then stepped in and ordered schools closed statewide.

Hogan, Elrich and Gayles have taken leadership roles during the crisis. The Council has "led from behind," struggling to stay relevant as other officials have effectively run the county for the last six weeks in their absence - an absence that began with a two-week Council vacation, just as the pandemic began in February.
Posted by Robert Dyer at 8:34 AM