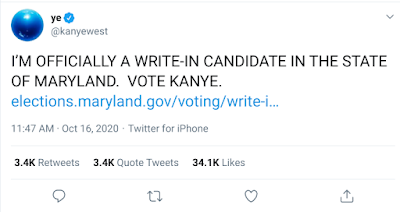 Kanye West has officially qualified as a write-in candidate for president on the 2020 Election Maryland ballot, the Maryland State Board of Elections announced. West's name does not appear on the list of presidential candidates on the ballot, but it can be written in by voters in the "Write-in" box in that race.

The significance of his qualification is that the state will tally the numerical total votes West receives, and they will appear in the election results. Write-in names that have not been qualified by the SBE, while still counting, will not appear in official result tallies.

West is running on a ten-point platform that includes reform of the justice system, fair trade, restoring prayer in schools and reducing household and student debt. Having spent some of his childhood in Montgomery County, West has said the area gave him his forward fashion sense, and he has given Rockville and Takoma Park shoutouts during his D.C.-area concerts in the past.