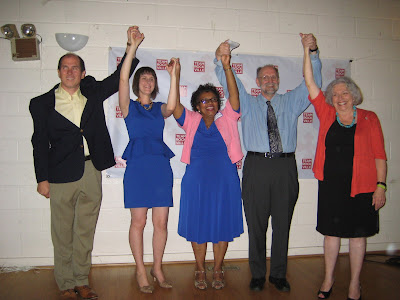 "You probably might guess what we're going to say tonight, but act surprised," Max van Balgooy joked at the outset of last night's campaign kickoff for the reworked Team Rockville candidate slate. Van Balgooy, returning as the slate's campaign manager, had the right idea, given that the slate had become the worst-kept secret in Rockville over the last few days.
Sima Osdoby, a 35-year resident of the city, officially announced her candidacy for mayor of Rockville, and will take on incumbent Bridget Donnell Newton in the November 3 contest. Osdoby has served on many city boards, and as Board President of Peerless Rockville. Joining her on the reshuffled slate, which swept all four council seats in the 2013 race, are former councilmember Mark Pierzchala, incumbents Julie Palakovich Carr and Virginia Onley, and newcomer Clark Reed.
"Who is Clark Reed, anyway," Reed asked the crowded clubhouse at New Mark Commons, predicting the question Rockville residents who don't follow the doings of the city's Environment Commission may be asking themselves this morning. Reed is the chair of that Commission. A Twinbrook resident since 2002, Reed said he's running because "I really wanted to give back to the city."

A co-founder of the Rockville Solar Co-op, Reed says his venture is "literally giving power to the people," having signed up 200 families for solar panels this year. Despite his rookie status in electoral politics in Rockville, he didn't shy away from taking a swipe at the current Mayor and Council. Reed argued that "personal grudges grew into dysfunction," producing a "continuous shower of negativity." Presumably referring to those who opposed weakening school capacity standards in the city's Adequate Public Facilities Ordinance, Reed said, "fearmongering is stopping us from moving forward."

That divide over planning and development became the central theme of the evening. By event's end, one thing was clear - Team Rockville leans more toward the dense, transit-oriented redevelopment being implemented at the city's door in the Pike District, than the small town approach the city has followed outside of its town center for decades.
Speaking of Town Center, it's in serious trouble according to Pierzchala. He noted he has counted 15 empty storefronts in the Town Center area. "That is stunning, given the amount of money we've spent," Pierzchala said, promising to "renew those [shopping] centers." Palakovich Carr cited the "problems ailing Rockville Town Center" as one of her priorities. 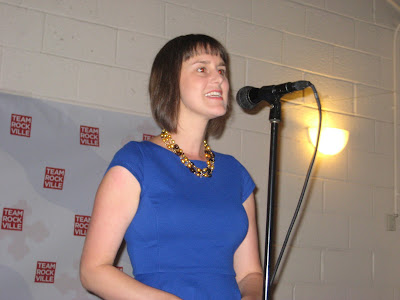 Palakovich Carr spoke the least about development, however, positioning herself as an environmental and pedestrian safety advocate. Overhauling the city's Animal Control Ordinance and the establishment of a water conservation program are among her first-term accomplishments. She said Rockville should be a city "where no one loses their life or jeopardizes their safety" when walking or biking. She also noted her vote in favor of bringing the city's school capacity standards in line with Montgomery County's weaker standards, which has opened the entire city up for development. That 3-2 Council vote enraged a large, well-organized coalition of citizens. Palakovich Carr termed the dissenters a "vocal minority of naysayers" last night.
Onley embraced her deciding vote on that school overcrowding issue. "I was responsible for bringing back the agenda item on the APFO/APFS," she said, to vigorous applause from supporters. She pinned the need for more housing on the growing number of millennials. Rockville needs more housing units "so that they can live in their city," Onley argued.

"I swore I was never gonna join another slate," Onley recalled. She said the caliber of the new slate changed her mind, promising that Team Rockville will "keep their thumbs on the pulse of development" if elected.
But mayoral candidate Osdoby gave perhaps the most aggressive speech of the evening, slamming unnamed elected officials by arguing "change is happening all around us, but critical decisions are not being made." And when decisions are made, the answer is "too often, 'No'," Osdoby said.

"Doing nothing costs," Osdoby declared. "We're standing still. The future is passing us by."

Criticizing the delay in the update of the Rockville Pike Plan, Osdoby charged "something's wrong here." Planning Commissioners recently defended the time spent on the plan as valuable in obtaining citizen input, and the fault of those on the Council who changed the APFS standards that were relied upon throughout the current draft. With those now out the window, the Commission said the Council knew their actions would delay the plan further.

Osdoby somewhat ironically blamed Newton for "failing to forge consensus" as mayor, given that Team Rockville's message last night implicitly labeled a sizable group of Rockville residents as a "vocal minority" of "fearmongering" bad actors, who in Pierzchala's words, are "spending too much time fighting last century's battles." Not exactly words to bring the city together.

Turnout was sizable for the last-minute event. Osdoby noted that the slate had only been working together for a few days, and "we've got a room full of people here." Notables in the crowd included former Mayor Rose Krasnow, current Councilmember Tom Moore, Maryland State Senator Cheryl Kagan (D - District 17), and former Planning Commissioners Jerry Callistein and Steven Johnson.

Not all supporters were from the city, however. Former state Democratic Party chair Susie Turnbull, Somerset Mayor Jeffrey Slavin, and Montgomery County Planning Board Commissioner Natali Fani-Gonzalez were also in attendance. I asked Fani-Gonzelez, who recently became the first Latino commissioner ever appointed to the Planning Board, if she was endorsing the slate. She clarified that she was there not to officially endorse anyone, but because she served on the board of Emerge Maryland with Osdoby. Turnbull was a co-founder of Emerge Maryland.
Team Rockville will compete against Newton, Council incumbent Beryl Feinberg, and challengers Brigitta Mullican and Richard Gottfried for the mayoral seat, and four council seats, on November 3. The voters who turned out in 2013 appeared to be undecided on what direction they wanted the city to take.

Voters that year eagerly voted for the council candidates on Team Rockville, but chose Newton over Pierzchala. One could interpret that as a desire by the citizens to pursue many of the agenda items of Team Rockville, but wanting Newton as a check on that power. One could also interpret Pierzchala's decision to run for council this year, rather than mayor, as a tacit admission that Newton will be tough to beat.

Or, perhaps the political ground has shifted since then. That's what makes elections exciting. 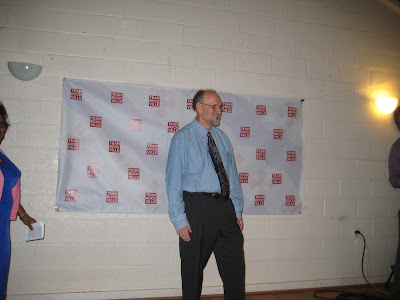 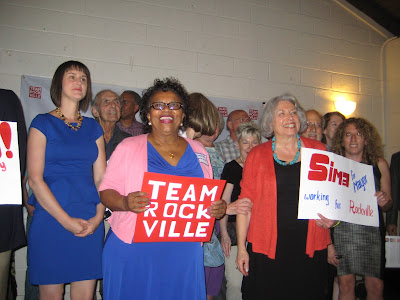 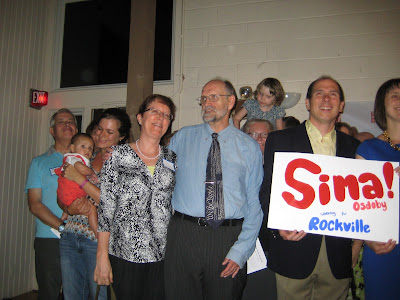