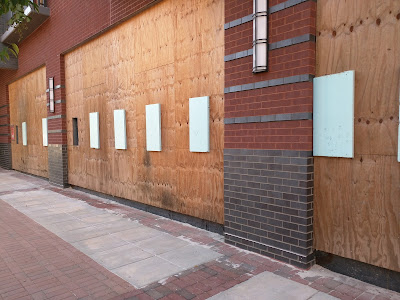 "550+ beers from around the world" - under the Montgomery County liquor regime? I've gotta see this. But that's what World of Beer is promising. 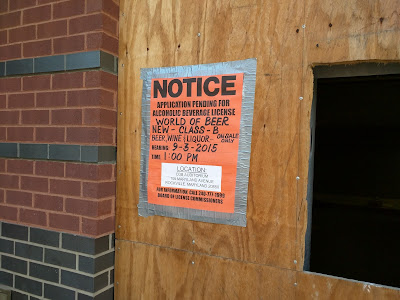 A liquor license application sign announcing the restaurant's future arrival was posted on an unfinished storefront in the Upton apartments, across the street from the Regal Rockville theater.

It's not yet known how World of Beer will keep its promise with MoCo's famed liquor challenges, which leave many bar owners with empty taps when their special orders can't be filled. But the beer list from World of Beer's Arlington location tempts one to imagine having an 1809 Berliner Weissbeer or Eggenberg or Heavy Seas Fielder's Choice on the patio this fall.

Dining options at the Arlington location include their signature German Pretzel with choice of mustards, sriracha lime shrimp tacos, and Belgian Waffle S'mores.

Should Gordon Biersch be concerned about this new competitor on the next block?
Posted by Robert Dyer at 8:00 AM

Email ThisBlogThis!Share to TwitterShare to FacebookShare to Pinterest
Labels: Rockville restaurants, The Upton, World of Beer