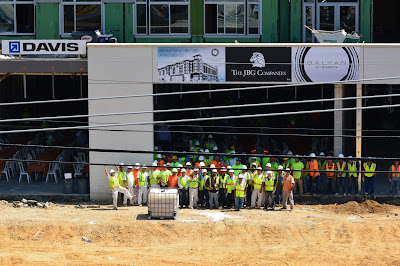 Just a week after Dunkin' Donuts announced it was opening a new store in the JBG Companies' Galvan development, two other eateries have signed on. Pie 360 and Taipei Tokyo will join anchor tenant Safeway at the mixed-use residential project, now under construction at 1800 Rockville Pike. The development is within walking distance of the Twinbrook Metro station.

Pie 360 is a new venture by Coal Fire, and is the latest entry in the new customizable pizza trend. Like Blaze Pizza and &pizza, customers will select every component of the pizza Chipotle-style, and it will be cooked in just a few minutes. Their menu also features panini, salads and desserts, which include a popular banana pudding. Pie 360 has an existing location in Baltimore, and others planned for Alexandria and the District.

Galvan is expected to deliver in late 2015; Dunkin' Donuts will open in 2016, as I reported last week.

Yesterday, Davis Construction workers at the Galvan site enjoyed a preview of Pie 360's menu, as the Coal Fire company provided lunch for them. The crew sat down to a feast of 480 slices of pizza, 180 sub slices, and six trays of pasta. And, of course, hundreds of cold drinks, as temperatures reached the upper 90s. 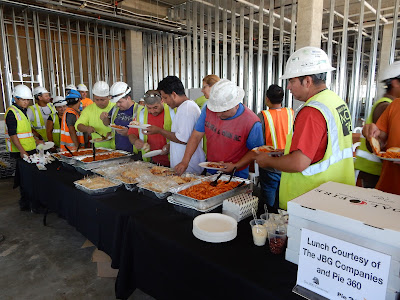 Photos courtesy Maier & Warner
Posted by Robert Dyer at 8:00 AM