How many armed guards does MoCo planning chair need to speak to a representative of a black church? (Photos) 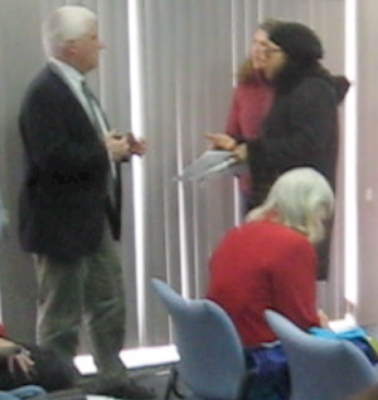 You will be able to judge your local elected officials by the degree to which they condemn the Montgomery County Planning Department's over-the-top reaction to peaceful protesters at their headquarters yesterday in Silver Spring. The protesters were asking the board to delay consideration of developer Equity One's sketch plan, until an African-American cemetery buried under part of the property can be fully investigated. Not only does the plan propose to construct a new building and garage atop the cemetery, but witnesses have reported the graveyard was desecrated by construction crews in the late 1960s, who reportedly illegally moved remains they encountered while excavating for Westwood Tower.

The optics of board chair Casey Anderson calling in armed police officers to surround him Secret Service-style, while speaking to a representative of a historic black church, created a public relations disaster that had even the County's Deputy Planning Director grimacing. But the more you analyze yesterday's debacle, the worse it looks. Forget about "How many County Council members does it take to screw in a light bulb?" It's time to consider, "How many armed guards does Casey Anderson need to speak to a representative of a black church?"

Isn't something fundamentally wrong with the direction our county is currently headed, that - for the first time I can recall - Planning Board meetings in 2015 and 2016 would end with residents shouting at the commissioners? Residents increasingly find their so-called public servants are actually at war with them, trying to force major changes developers are seeking, that are opposed by the vast majority of the community. In the past, mass uprising against a government proposal would cause it to be tabled. Now our officials ignore the boos, lower their shoulders, and power into the end zone - sometimes even sharing a touchdown dance with the developers who have scored the win.

A Council and Board at war with their own constituents probably explains why a grand total of 7 police vehicles (each one presumably representing at least one officer to drive it) were ultimately deployed against protesters by the Planning Department yesterday. I counted 6 Park Police vehicles, and 1 County police cruiser. I personally have never seen more than one armed police officer at the board, and only when a contentious public hearing is scheduled. Part of ignoring constituent anger, is hiding behind armed guards so you can continue to thumb your nose at residents, and advance your agenda.

When you consider this is Black History Month, you'd think the planning department and board in a liberal county like this would be bending over backwards to be sensitive to the concerns of the Macedonia Baptist Church, rather than appeasing the fiscal timeline of an out-of-state developer. Yet black, white, and Asian protesters were denied their First Amendment rights to carry signs into the public board meeting yesterday right off the bat. Even our corrupt County Council has never enforced such a rule.

Protesters silently waited at the back of the room until the meeting recessed, and then a representative of the church, Marcia Coleman-Adebayo, approached Anderson to deliver a community petition. Anderson refused to accept it. He was technically correct that he should not speak to any side in a matter pending before the board, but he has been quick to ignore that rule when a developer wants to speak with him, as detailed in my report yesterday. But did Anderson need three armed police officers surrounding him to have a civil conversation? And could he simply have accepted the petition and handed it to a staff member?

The racial and gender subtexts of the encounter made it all the more troubling - and surprising - in a county many have assumed was progressive and politically-correct to a fault. Concerns of the church have always taken a back seat to the concerns of Equity One at the board, as the agenda for February 23 shows. Perhaps the Montgomery County political cartel, under pressure from its developer overlords, "doesn't have time to be politically correct anymore." Let's take a look: