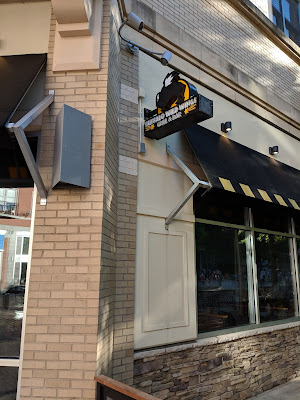 Effective this week, Buffalo Wild Wings at 33-C Maryland Avenue will close an hour earlier each night, except for Sunday nights, which will remain the same. Monday through Thursday, the popular chicken wing restaurant will close at 12:00 AM instead of 1:00 AM. And on Friday and Saturday nights, BWW will now close at 1:00 AM, instead of 2:00 AM as before.
Montgomery County's nightlife business continues to tank following the disastrous "nighttime economy initiative" by County Council President Hans Riemer. The Nighttime Economy Task Force debacle led to the closure of 15 nightspots in downtown Bethesda alone, and cutbacks in late-night hours similar to what we are witnessing with Buffalo Wild Wings here. Instead of ending the County's archaic government liquor monopoly that is killing restaurants and bars, Riemer led the Council move to strengthen the monopoly. The same monopoly keeps residents from being able to buy beer and wine at grocery, drug and convenience stores countywide.

There simply aren't enough people out late at night anymore to sustain businesses during those hours. Rockville and downtown Silver Spring have fared slightly better than Bethesda, but we can see things are still moving in the wrong direction countywide.
Posted by Robert Dyer at 8:00 AM