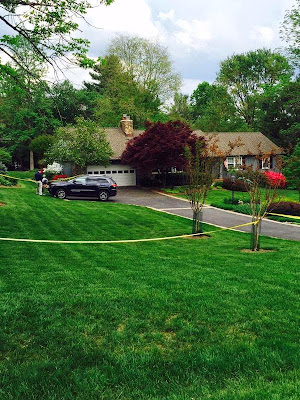 Montgomery County Police homicide detectives are investigating the deaths of a married couple in the Glen Hills neighborhood of Rockville. Richard Louis Vilardo, 65, and Julianne Humphries Vilardo, 67, were found dead by police Sunday, May 10, when officers responded to a 911 call at 12:18 PM.

Police say both victims were found with "trauma" to the upper body. Julianne Vilardo was found inside the home, and Richard Vilardo was located in the backyard.

Detectives say the two were scheduled to meet family members yesterday morning. When they did not arrive, family members went to the home, where they found the two deceased and called 911.

An autopsy will be performed by the state medical examiner in Baltimore, police said yesterday.

The Washington Post reports that Richard Vilardo was a co-founder of Pinnacle Hotel Management, which develops Marriott and Hilton hotels.

Anyone with information regarding the deaths of Richard and Julianne Vilardo is asked to contact Montgomery County Police at 301.279.8000.

Photo via Montgomery County Police
Posted by Robert Dyer at 8:00 AM