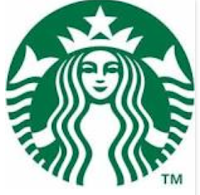 Healthy Montgomery, a Montgomery County Government initiative co-chaired by County Council President George Leventhal (D-At-Large) and largely funded by taxpayers, was chartered to "improve the health and well-being of Montgomery County residents." Among its primary stated goals are the reduction of diabetes and obesity.

So you might be surprised to find that Healthy Montgomery plans to reward county students with gift cards for sugary, fat-filled drinks at Starbucks.

County high school students are invited to a Healthy Montgomery-sponsored "community conversation" at Suburban Hospital on May 21, to "discuss what they think about health and the quality of life in Montgomery County." For attending, the event announcement says, the students will be rewarded with a free "$5 Starbucks drink card". They'll also get a Chipotle gift card. 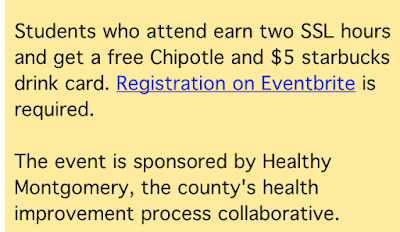 The most popular Starbucks drinks are loaded with sugar, and are often high in fat, as well. Many have more grams of sugar than the often-demonized 12 oz. Coca-Cola. They certainly exceed the recommended daily intake of sugar.

Chipotle isn't exactly health food, either. The average order at Chipotle comes in at around 1,070 calories, 75% of the recommended daily intake of saturated fat, and a whopping nearly-2,400 milligrams of sodium.

This is not only hypocrisy at taxpayer expense, but absurd when one considers Council President Leventhal's longstanding crusade against fast food restaurants in the county.

In 2008, Leventhal was quoted as saying, "school policies should support parents, and not let junk-food marketers go around parents’ backs directly to young children." Yet, the Healthy Montgomery initiative he co-chairs is literally going around parents' backs, and delivering Starbucks and Chipotle marketing and food "directly to young children." "It’s incredible, the extent to which our kids are subjected to [fast food] advertising," Leventhal told an audience of students and parents in 2007.

Sure, you can absolutely order healthy food and drinks at Starbucks and Chipotle. But you can at McDonald's and Wendy's, as well. Leventhal memorably took a publicity stunt trip to Wendy's, remarking on the nutritional content of the Baconator. He didn't mention that Wendy's also offers a line of salads and baked potatoes that are far healthier than the average Starbucks or Chipotle order.

The county just added new taxes on electronic cigarettes and Airbnb. And as Bill Turque writes in the Washington Post, the just-approved County budget increases spending by about $90 million, and your property tax bill "will tick upward slightly." A new property tax increase is being floated for next year's budget. And a majority of the Council voted to keep the Energy Tax the same, despite having promised to eliminate the massive increase it passed in 2010 in 2012. They lied to taxpayers. Period.

It's amazing that residents will be paying more and new taxes, under a new county budget that is bigger than last year's, and yet there is somehow money left for escapades such as this.