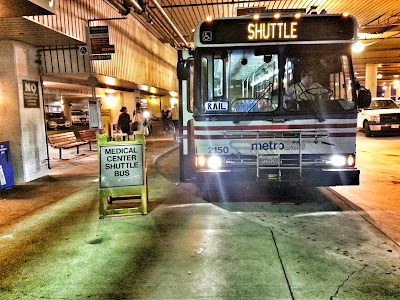 The Montgomery County Transit Task Force has set a public forum on the controversial proposal to create an unelected taxing authority that could raise unlimited taxes on residents to fund Bus Rapid Transit and other projects. Residents and union leaders overwhelmingly rejected the idea at a raucous public hearing earlier this year. Yet County Executive Ike Leggett is bringing the Independent Transit Authority (ITA) proposal for another swing, via his Transit Task Force.

That task force is holding meetings to discuss the new taxing authority in Rockville amongst themselves. But there will be a "Public Forum" on the unpopular proposal on June 17, from 6:00 PM to 10:00 PM, in the 3rd floor Hearing Room of the County Council office building at 100 Maryland Avenue in Rockville. In the meeting agenda posted online, it says the topics will be the ITA's organization, transfer of functions from existing county agencies (a major point of contention for UFCW Local 400/MCGEO Union President Gino Renne), and - most important to you, the taxpayer - the financial and fiscal implications of the new taxing authority. Questions the task force wants your feedback on will be provided to the public via the Transit Task Force website prior to the forum. However, just what the ability of the public to speak at the forum will be is not specified. Is it a public hearing with a 3 minute speaking time? Or is it a forum where the public will simply be spoken to?

It must be noted that, like the BRT hearing 3 years ago, this forum is being held in the summer. Parents no doubt know that this June 17 meeting will come just after the end of the Montgomery County Public School year. That means many will be leaving for their first summer vacation, which will certainly hold down attendance.

That's probably not an accident. You'd schedule a forum for summer, too, if you were trying to ram through an unelected body that can be handpicked by the County Executive.

An unelected body that can exceed all existing caps and restrictions on tax increases (in fact, the task force is going to be discussing on June 3 the "merits of empowering [the] County to exceed Charter limitations in several respects"). Not the negatives, of course!

Keep in mind that this is the same task force that suggested you should pay a new, 15% property tax increase to fund the BRT system that will primarily benefit real estate developers. You would pay, not the developers, and this was a countywide tax proposal. Do the math.

It's also the same task force whose chairman Mark Winston - as I reported two years ago - could directly benefit financially from the creation of the ITA and a BRT system. Winston, leading the effort to "get you out of your car," memorably admitted "it has been a while" since he rode a bus himself. Something he has in common with the "pro-transit" County Council and Planning Board, as well.

Remember also that this unelected ITA, as described in the legislation the task force is discussing, would not have to show its budget to any elected official. To quote the actual legislation, the ITA would not be required "to submit its capital or its operating budget to the County for approval."

The ITA would also have unlimited power to seize private property, and sell it at a sweetheart price to developers who contribute to the elected official who appointed them. It would have the power to carry out the demolition of homes and businesses, and not have to answer to the outrage of the landowners at the ballot box.

And speaking of ballots - the legislation would include a provision that would make it impossible for you, the citizens, to put a referendum on the ballot to bring the ITA taxing power under any control or limitation.

This proposal was thoroughly rejected by the citizens and county employees - yet here it comes again, as they do what they do best in the MoCo political machine: ram it through.

Save the date.
Posted by Robert Dyer at 8:00 AM