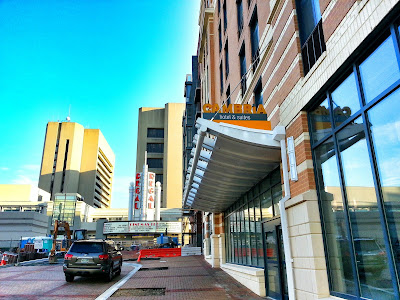 Choice Hotels' decision to not send a representative to last night's Rockville Planning Commission meeting, to discuss the company's request to change the name of Renaissance Street, didn't exactly grease the wheels for a redesignation. Some on the commission suggested it would have been more helpful to have someone from company there to discuss the issue.

The new street, which runs between E. Middle Lane and the Regal Cinemas alongside the Cambria Hotel & Suites, shares a name with a competing hotel brand. As it turned out, the one point the commission agreed upon was that the names suggested by Choice weren't adequate to justify the change.

Among the names floated by Choice's application request are Exchange Drive, Catalyst Drive, Synergy Road and Innovation Drive. Commissioner Jack Leiderman found those "frankly, boring" compared to the existing Renaissance name. He said that one company's anxiety over branding shouldn't outweigh the interests of citizens, businesses and other stakeholders, and that there was a substantial public investment in the redevelopment there over the years.

Commissioner David Hill argued that Choice Hotels had made a significant investment in the city, by locating its international headquarters there. Leiderman noted that the city had already acquiesced to allow Choice to name its tiny street in front of its building a few years ago.

Chair Don Hadley and Commissioner John Tyner were willing to consider the request, even offering some potential names or concepts. Tyner felt the name should reflect activity, while Hadley suggested that the city contemplate a name that reflects public use. Hill threw out "Agora", the Greek term for "gathering space."

Commissioner Charles Littlefield said he would be more inclined to take the request seriously if the company showed it, too, was serious by sending a representative to engage the commission.

Staff Liaison Andrew Gunning said he would attempt to get some public input on the name change, if feasible. The issue will return for further discussion and update at the next two meetings, on June 10 and June 18.
Posted by Robert Dyer at 8:00 AM