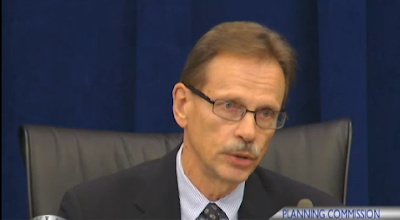 Unintended consequences, or a "shell game"? How some changes slipped through along with Rockville's adoption of Montgomery County's school capacity standards, was a question on the minds of several Planning Commissioners at last night's meeting.

The change now exempts age-restricted senior housing projects from traffic impact standards. As senior housing has little to do with school capacity, Leiderman wanted to know why such a change was made, and how it was done without alerting the commission or the council. "I'm a little bit troubled by the process involved," Leiderman said.

Under the new standard, Leiderman argued, if Redgate Golf Course were redeveloped as a Leisure World-style community - minus facilities that would subject it to traffic penalties - the resulting major automobile generator would be entirely exempt. Leiderman said the new policy "could be potentially catastrophic."

Staff Liaison Andrew Gunning and Chief of Planning Jim Wasilak said the change likely slipped through when staff tried to match the subdivision staging policy with that of the county's.

Leiderman noted that Mayor Bridget Newton brought the traffic policy change up twice during council discussion of the APFS changes. Commission Chair Don Hadley recalled that he mentioned it specifically during his Annual Report briefing to the Mayor and Council.

A suggestion of drafting a text amendment to correct the unintended change was proposed by Leiderman. Commissioner David Hill preferred to limit action to a letter alerting the Mayor and Council to the problem. Hadley offered a compromise: a letter that would outline how the Mayor and Council might consider correcting the language. Leiderman moved to adopt Hadley's suggestion; his motion was seconded by Hill.