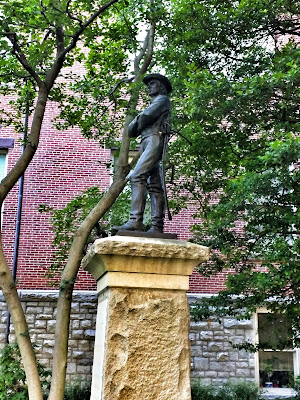 An overflow crowd turned out to speak and listen at an unusual work session called by the Mayor and Council Monday night, to discuss the fate of Rockville's Confederate soldier statue on the grounds of the Red Brick Courthouse. Many residents of the city, Montgomery County, and the state of Maryland said removal of the statue would merely be an attempt to erase the history of those jurisdictions' involvement on the side of the Confederacy during the Civil War. Others said it represented a message of pure hate, white supremacy, and an orchestrated attempt to recast the Confederate cause in more noble terms. Some were even descendants of actual Confederate soldiers, who were offended by some speakers' attempts to compare those Americans to Nazi and Japanese soldiers in World War II.

Two additional lines of argument emerged over the evening. First was increased questioning of Montgomery County Executive Ike Leggett's authority to be "the decider" in this case, after Leggett announced Friday that he had made the decision himself to remove the statue. Along those lines, there were questions as to where the money to move it and store it would come from.

Secondly, two speakers noted that the U.S. Congress in 1958 passed an Act of Congress that made all Confederate veterans American veterans.

The evening began with a panel of local experts on history and the Civil War, as TV station cameras jockeyed for room in the crowded Mayor and Council chambers of City Hall.

“Unfortunately, we can’t pick and choose what we receive from the past,” Matthew Logan, Executive Director of the Montgomery County Historical Society said. Logan said that the statue represented the Confederate sympathies and soldiers of Montgomery County during the Civil War. He hoped that, rather than hide the statue away, it could be used to "launch a broader discussion about how the symbols from our past affect us to this day. The way we resolve this dispute is more important than the ultimate fate of the statue," Logan said.

Nancy Pickard of the Peerless Rockville historical organization said the rush to judgement on the statue "pretends that the past does not exist." She described it as an "important vestige of our city and county history," arguing that "erasing those memories, instead of allowing them to inform and educate, is a mistake."

Historian Eileen McGuckian, who has written extensively on the history of Rockville, called the historic courthouse "the right place" for the statue. The brick structure was so much the center of life, McGuckian said, that the village "was known as Montgomery Courthouse" before it was Rockville. 1913 was a poignant time to erect the statue, she said, because area Civil War veterans were now dying.

In sometimes personal and emotional testimony, Tony Cohen of the Menare Foundation and Button Farm questioned where all of this reconsideration of historic symbols would lead us as a community. Would streets named for local Confederate sympathizers be changed, as well?

Rockville Mayor Bridget Donnell Newton said she had just spoken with Leggett earlier Monday. While Newton said he was not yet reconsidering his decision to remove the statue, she added that "he’s looking to work with us," and that the executive acknowledged it would be appropriate for the Historic District Commission to at least give some feedback on the issue.

To those who have said the process is moving too quickly, Councilmember Tom Moore said, "I should have spoken up 18 years ago, when I first arrived in Rockville. I reckon we are moving 18 years too slow."

Councilmember Virginia Onley said she was pleased at the level of interest the community displayed in the topic through its turnout. "There are a lot of folks in this room that I don’t recognize. I want to thank each and every one of you," she said.

A Silver Spring resident said, "just melt the thing down," and use the resulting material to create a new statue promoting unity.

One of the creators of an online drive to remove the statue said it "should be removed immediately, and never returned to public property again." He said it was erected by selfish, "white politicians seeking to unify white Montgomery County residents for their own benefit," during "a time of extreme race hatred” in Maryland.

In equally strong comments on the other side of the issue, a Maryland Confederate heritage organization member said removing the statue would be a "surrender to the Dylan Roofs of the world," saying his group strongly resents the appropriation of Confederate symbols by hate groups.

Civil War re-enactor and county resident Galen Fairbanks said, "only totalitarian regimes edit their history. This is America, let’s act like it."

Brian Karem, editor of the Sentinel newspaper, said he hadn't planned to speak, but actually made a strong point about just how far Confederate sympathies and participation had extended in Rockville during the War Between the States. He recalled the head of the 1st Maryland Confederate Cavalry was a mayor of Rockville. Karem gestured toward a wall in the room and noted that former mayor's "picture is right there on that wall."

Adol Owen-Williams II, asked how many black Republicans were in the room. "Me and me alone," he replied to his own question, pointing out that the NAACP was founded by Republicans. "I vehemently oppose moving this statue," he said, noting the participation of free blacks in the Confederate army. Owen-Williams suggested we face more pressing issues than the statue, but instead the county is "busy focusing on irrelevant things."

Despite Leggett's decision, at least one other discussion will be held in a closed meeting at the behest of County Council President George Leventhal, and the HDC is expected to discuss the issue as well. 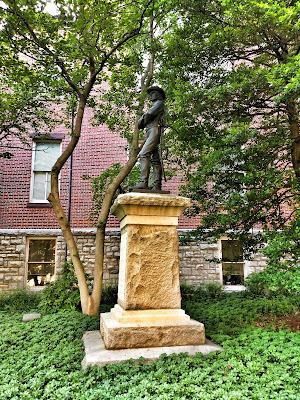 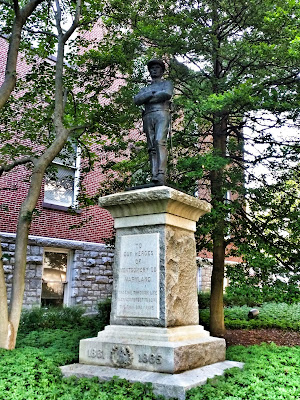