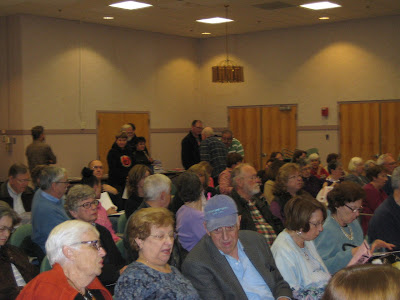 Rockville mayoral challenger Sima Osdoby and Council incumbent Beryl Feinberg fired back at their political detractors at last night's College Gardens/Woodley Gardens-sponsored debate. A standing-room-only crowd packed into the Carnation Room at the Rockville Senior Center to hear what candidates'  plans were for their neighborhoods and the city at-large. And they sat through to the end, earning praise from moderator Sen. Cheryl Kagan (D-District 17), herself a past resident of both communities.

Osdoby cut right to the chase in her opening statement, addressing "the rumor going around" that she and her slatemates on Team Rockville are beholden to developers. "There is no room in Rockville for this kind of nasty campaign shenanigans," she declared. Feinberg was dealing with the second broadside against her campaign in as many weeks. But the primary target of her remarks was neither on stage nor on the ballot. Councilmember Tom Moore, who is not seeking reelection, took his once-ally Feinberg to task in a blistering critique on his blog. He chronicled Feinberg's evolution on the Adequate Public Facilities Standards controversy, frankly expressing his sense of betrayal at her shift.

Feinberg was equally frank in her response, acknowledging her views on the APFS have evolved. "I've never said my view on the APFS did not change," she said. "I learned. I read. I listened to the neighborhoods. There have been several [online] postings lately that have been full of lies." Promising not to engage in attacks during the campaign, she said, "I have been above the fray."

To the debate planners' credit, those weren't the only notable moments last evening. The format was decidedly more antagonistic than previous candidate forums this fall, including a segment where candidates were told to ask one of their opponents a question.

It not only made the debate more interesting, but also helped voters learn more about the candidates. For example, Feinberg asked (or attempted to ask, as her question exceeded the 15-second time limit) incumbent councilmember Julie Palakovich Carr about Gaithersburg's current flirtation with allowing its schools to operate at 150% of student capacity. The new overcrowding limit was slammed by a PTA representative at Monday night's Gaithersburg Mayor and Council meeting. Palakovich Carr, who voted to raise the limit from 110% in Rockville to 120%, expressed disapproval of Gaithersburg's 150%, saying, "I think that's ridiculous."

Council candidate Mark Pierzchala pointedly asked fellow challenger Patrick Schoof about his active role in stopping construction of the proposed EZ Storage facility adjacent to Maryvale Elementary School in East Rockville. Pierzchala attempted to cast Schoof's role as a negative, asking "Why should voters trust you when your past actions have been so extreme?"

Schoof defended himself, noting that there were 120 pages of health and safety-related evidence against the applicant for the facility. He recalled the Planning Commission had narrowly allowed the project to proceed on a 4-3 vote, "not 7-0." Schoof also echoed earlier comments by Mayor Bridget Donnell Newton, arguing that, had the city performed the Southlawn Industrial Area study requested years ago by East Rockville residents, "this easily would not have gone this way." The City ended up banning self-storage facilities within 250 feet of schools, rendering the approved EZ Storage application moot, a decision that could be addressed in the courts. All of this could have been avoided, had the city acted on the Maryvale community's request for the Southlawn study earlier, Newton said. "Had that been done," she said, the project would never have been an issue.

Monday night's 3-2 vote to postpone action on a report that found serious flaws in the City's purchasing practices has already become a major campaign issue. Councilmember Virginia Onley, who voted for the 90-day delay along with Moore and Palakovich Carr, asked council candidate Brigitta Mullican how she could pay for her property tax cut proposal. Mullican seized on the purchasing report, noting the potential savings to the city's budget if it were successfully implemented. Other cities of similar size have far smaller budgets than Rockville, Mullican noted. She said she wants "a complete review of how our money is being spent."

Similarly, Osdoby asked Newton how she proposed to find the savings to eliminate the Cost Allocation Program, which Newton has said puts an unfair burden on taxpayers. Newton said that if Osdoby had watched Monday night's meeting, the report had shown a potential savings of $5-7 million, enough to allow the City to end the CAP program. "It is imperative that we show our taxpayers where that money is going," Newton said, noting that spending in some departments is "hidden from view in the CAP."

Turning the tables, Newton asked Osdoby if she would have voted to "kick the can down the road" on the purchasing report. "When I have the same opportunity to look at it as you do, that's when I'll make my deliberations," Osdoby responded. The purchasing report has been publicly available online, not just to elected officials, however.

Candidates were asked how they propose to increase Rockville's notoriously-low voter turnout. Council candidate Richard Gottfried said that in the course of knocking on over 5000 doors across the City, many of those who answered don't match the names on the voter rolls. He suggested not overlooking the value of old-fashioned ways of getting potential voters involved, such as U.S. Mail and doorknocking. "Not everyone is high-tech," Gottfried noted. Schoof said voters would be more engaged if the Council was more responsive to residents' stated preferences, rather than voting contrary to the majority's wishes. Palakovich Carr said the City should have a conversation on the question of allowing non-citizens to vote. She said 1-in-3 Rockville residents was born outside of the United States, meaning many have "no say" in government decisions. Palakovich Carr also suggested the City consider again the question of moving its elections to gubernatorial or presidential voting years. "The depressing thing is," she noted, that innovations like early voting have only increased overall turnout by about 5%. Council candidate David Hill opposed such a change, worrying that presidential year voters wouldn't pay close attention to City issues. "The quality of the voters is more important than the quantity of the voters," was his conclusion as a member of the City's 2002 Charter Review Commission, Hill recalled. Pierzchala saluted the host neighborhoods of the debate for having the highest turnout in the City. Mullican said she feared partisanship would creep into the City's non-partisan elections, if they moved to a crowded and highly partisan Presidential ballot. The change could make already-difficult fundraising even harder for City candidates, she said. Feinberg suggested better informing voters of what city funds provide versus County and state funds, and providing seed money to create more civic associations where they don't exist.

Crime was another topic covered last night that hasn't been discussed much during the campaign. Newton was out ahead of the topic in her September announcement speech, when she called for the hire of more police officers. She reiterated her concern that the City currently has only 59 sworn officers, while its daytime population swells to about 100,000 people. Newton also pointed out that more than 70% of calls are responded to by City, rather than Montgomery County, officers. The city should be recouping that $4 million in tax duplication funds, she argued.

Osdoby urged the City to ensure there was adequate street lighting, a problem Pierzchala concurred with from his own experience as past president of the College Gardens Civic Association. "It's very hard to get Pepco to get them all going," he lamented. Pierzchala also suggested a data-driven Special Operational Unit that could target upticks in crime in specific neighborhoods. He also recommended "revising Neighborhood Watch in a big way," recalling seeing Watch signs with peeling paint when he walked every street in the City as a warmup to his campaign.

"Rockville probably has the best police department I've ever seen," Gottfried said. He advised other communities have officers come out to pinpoint problem areas, as he has in Twinbrook, where he is President of the citizens association. Officers showed where bushes should be trimmed to eliminate hiding places, Gottfried said, and the neighborhood is seeking additional street lighting.
Hill said the insularity of neighborhoods can sometimes increase their vulnerability to crime. "Visibility and awareness" are important, Hill said, and he shared Newton's concern over the size of the police force in the growing city.

"We are the best defense against crime," Onley said, also suggesting police increase their visibility in neighborhoods. 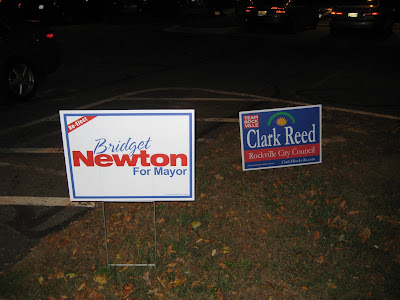 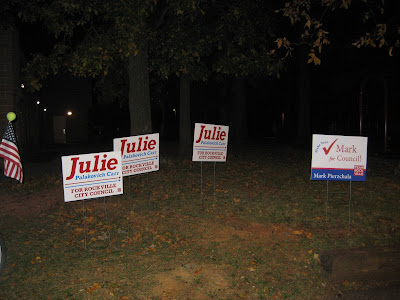 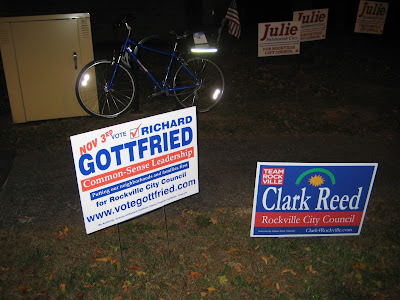