No action on Confederate statue reconsideration request by Rockville HDC 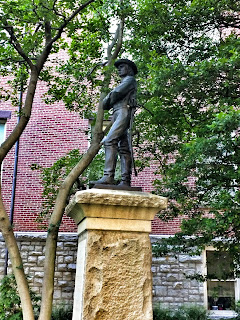 Rockville's Confederate statue remains on track for removal, as the Historic District Commission declined to revisit its September decision to permit Montgomery County to move it at its October 15 meeting. Opponents of the move had hoped the HDC would put a reconsideration of the decision on its November agenda.

The hot topic was not even the subject of much discussion at the meeting, where Peerless Rockville Executive Director Nancy Pickard briefly addressed the HDC during the Public Comment period. She asked the commissioners to "take a fresh look at the decision," based on information that those who oppose the relocation have uncovered since the September meeting.

Earlier in the evening, the commission went into a closed Executive Session, to receive legal advice on "correspondence received October 2." HDC Chair Rob Achtmeyer later noted the commission had received correspondence from Peerless Rockville and others, but the topic was not addressed further at that point.

Close to the end of the meeting, Commissioner Craig Maloney did briefly comment on the statue request during Old Business. "I don’t think this is an appropriate course," Maloney said. "We made the correct decision on this."

In other business, the commission declined to find 9 triplex units at 9701 Veirs Drive to be of historic significance. The homes will be replaced with a new residential building. Jim Wasilak, Chief of Planning for the City of Rockville, said the developer has not yet submitted that project for review by the Planning Commission.
Posted by Robert Dyer at 8:00 AM