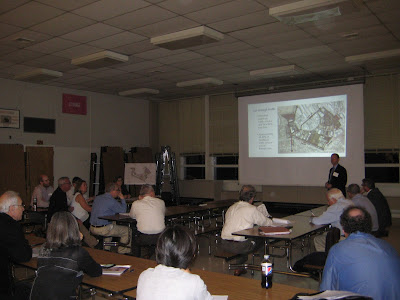 Consulting firm VHB offered options its team believes could improve the Southlawn industrial area of Rockville, and make it more compatible with the residential neighborhoods that surround it, at a public meeting last night. Also attending the meeting at Maryvale Elementary School were David Levy, Chief of Long Range Planning and Redevelopment for the City of Rockville; Susan Swift, the city's Planning and Zoning Director; Rockville Planning Commission chair Don Hadley; and City Council candidates Richard Gottfried and Patrick Schoof.

The suggestions fell into the categories of traffic, land use, and improving the viability of the current industrial uses.

Traffic concerns were covered in the most detail last night. Dan Lovas of VHB said the team's traffic study suggests that 10-30% of traffic in the study area is cut-through traffic. The fact that much of the cut-through activity occurs during the rush hours, Lovas said, can make the amount seem greater than those numbers suggest.

Schoof, who has been working with residents and business owners in the study area on several issues in recent years, asked if the study was an actual count using license plate data. That would more accurately show where cars ended up after driving through, and whether they were residents, or cut-through drivers. Lovas said they "haven't done a full-scale origin-destination study." Schoof said there have been ongoing concerns and questions regarding the accuracy of City-conducted traffic counts in the past.

The options proposed by Lovas were:

This was the most dramatic change proposed to reduce cut-through traffic. Access to N. Horners Lane from Southlawn Lane and Dover Road would be cut off, and a new loop would be created using Mason Drive to connect Southlawn and Dover. 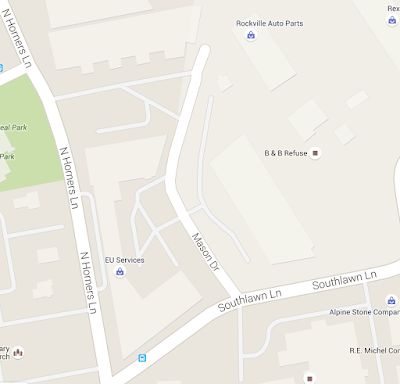 There is also a piece of land owned by Montgomery County that would be an alternative route for the potential road connection. When these options were presented, one current business owner was not pleased. "One of [the route options] takes my property," he said. He added that there is an African-American graveyard in a junkyard there, "so good luck with that."

Cutting off the industrial area to the north, and preventing customers from reaching Southlawn businesses from the residential streets, were other concerns about this option.

Regarding such current customer trips via neighborhood streets, land use attorney Bob Harris warned "You'll kill that once you cut off access to town center."

Hadley said a larger issue is the overall lack of access from the study area to MD 355, which is cut off from East Rockville by the Metro Red Line tracks. He suggested the City explore the possibility of annexing land to permit a new vehicular crossing of the tracks into East Rockville.

Swift said residents might not agree to such an idea, noting that past discussions regarding connections via Westmore Road/Avenue have not sat well with some residents in Lincoln Park. "There's not an easy fix" to the 355 connectivity problem, she said.

Another member of the VHB team said he was told that N. Horners Lane is considered a primary through street by the City, and may not be eligible for speed humps or severe restrictions on speed.

Nancy Fox of VHB outlined possible strategies to improve economic conditions in the industrial area. She said the City could use its economic development tools and incentives, and smooth the regulatory and permitting processes.

Businesses could also take active steps, she said. One approach recommended was for the Southlawn industrial businesses to form a Southlawn Business Association. Similar to a merchants' association, Fox said it could potentially be administered by an existing group like REDI or the Rockville Chamber of Commerce. The group could raise funds to facilitate streetscape improvements, and work with larger industrial associations.

Schoof said he had concerns that the Chamber might not be the right fit to represent industrial businesses, and that REDI has programs primarily to attract new businesses and help current ones expand, as opposed to simply sustaining enterprises. He also warned of outside organizations being brought in from the region or state, if they did not have the best interests of the Southlawn tenants in mind. Harris concurred. Swift said that Southlawn having its own organization "is where the strength would be."

On land use, VHB's Paul Mayer suggested making the properties along 1st Street and N. Horners Lane a "transition area" could better connect the residential neighborhoods with the residents of David Scull Courts, a public housing complex at Taft Street and 1st Street. He also suggested changing the zoning of David Scull Courts from industrial to residential, and creating a gateway to the community at the 4-way intersection of Taft and 1st. The latter would involve better pedestrian crossing infrastructure, and streetscape improvements to give a more residential character.

One question that didn't come up regarding a zoning change for David Scull Courts - does the current industrial zoning protect those affordable homes from redevelopment? With all of the development occurring in the Shady Grove/Gude/Crabbs Branch vicinity, residential zoning would surely make the David Scull property worth a fortune.

There was some consensus among attendees that many of the traffic issues in the study area may need to be addressed with the larger traffic congestion issues along MD 355 and Veirs Mill Road. Swift encouraged stakeholders to give feedback on those wider concerns, so that they can be taken into account in the study. Levy suggested the current citywide Master Plan process could also provide "a broader lens" for discussion of big-picture issues.

The next Southlawn public meeting will be on December 9 at 6:30 PM at Lincoln Park Community Center. An additional meeting will be held in January, and in February, the study recommendations will go to the Planning Commission and Mayor and Council.
Posted by Robert Dyer at 8:00 AM