MoCo residents on ITA at public hearing: "This is a lunatic idea" 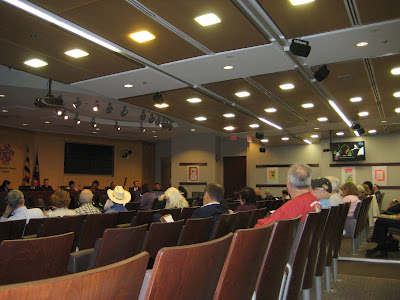 What stands out is how the Montgomery County political machine is starting to sound more desperate as the ITA battle rages on. As Silver Spring resident Larry Dickter noted in his testimony, the ITA has "little if any public support." Even County Council President George Leventhal has suggested that the ITA bill not be submitted to the state legislature at this time. It's unclear what support the ITA has on the County Council or among Montgomery County legislators at this point, following 3 public hearings at which said public has overwhelmingly slammed the idea.

How desperate are ITA proponents? They're criticizing opponents for being white. You can't make this stuff up folks. Tom Liderto of Takoma Park, an ITA and BRT proponent, said that whites now make up less than half of the population in the county, but were the vast majority of the citizens testifying. He advised the task force that they might be hearing "a lot of loud voices from a minority."

A sure sign of desperation is when you have to pull out the race card. Your initiative has no public support, and a majority turns out to oppose it? Start attacking the crowd on the basis of race, age, etc. "I wanted to testify. But I'm white. So, I'd better do the right thing and stay home."

Likewise, it's intriguing to hear a particular faction of the County's Democratic Party adopt the talking points of Richard Nixon and Donald Trump. The so-called silent majority Liderto was referring to is gaining popularity as a talking point among that group. County Planning Board Chairman Casey Anderson and former Leventhal staff member and blogger Dan Reed are among those who have cited a silent majority, who they say fervently favor the urban density, urbanization of the suburbs and war-on-cars transportation policies Anderson and Reed are advocating for.

Perhaps in the same county where Councilmember Hans Riemer takes a $500 campaign check from Mitt Romney's Bain Capital and $4000 from Mitch Rales, two Wall Street pioneers in outsourcing American jobs to China, this shouldn't be all that surprising, I guess.

Does a millennial telling older residents in the room that they should stop opposing BRT because he'll be alive in the coming decades and they won't sound kind of desperate? Yep. Cold, but desperate.

You'd be pretty desperate, too, if you were in their position.

The hearing wasn't all that far along, when task force Chair Mark Winston felt compelled to engage Montgomery County Civic Federation President Paula Bienenfeld in a back-and-forth exchange over how she should testify. Bienenfeld had already shown up the task force for its hypocrisy when asking who among them took transit to the hearing. Only Delegate Marc Korman (D-District 16) raised his hand. Do as we say, not as we do.

"We're not here to respond to questions," Winston advised Bienenfeld. "I believe you can answer questions," Bienenfeld responded, noting that taxpayers are funding the task force.

Do as we say, not as we do. It was a bit of a theme last night. Another proponent of BRT recalled that he and wife quit working at Montgomery College's Rockville campus "twenty years ago," because the drive from Takoma Park each morning was too stressful. Wait a minute. The Red Line runs from Takoma Park to Rockville. Even in 1995. If they didn't use transit then, why would they use an even-slower kind of transit now?

A very expensive kind of transit, in fact, especially when you break the cost down per rider and there's no indication there will be many.

Resident Kevin Harris, who is also a former planner with the Metropolitan Washington Council of Governments, said there has been "no data presented to show that BRT would solve the problems we're facing. We still have not been presented with the most basic traffic data" to justify BRT. The economic development numbers cited by Sage Consulting were "completely implausible," Harris said, terming Sage's work "wildly irresponsible modeling."

Harris questioned the task force's objectivity and and accuracy, "if you've already made your recommendations without data." "Performance metrics have never been established," Michael Pfetsch of Pinewood said.

Jerry Garson, resident and MCCF Treasurer, also questioned the task force's numbers. "I'm a CPA," Garson marveled, and "I can't figure it out." He pointed out that the task force calculations show "no administrative costs in the first five years of operation," an impossibility.

Silver Spring resident Carole Ann Barth took a creative approach in skewering the ITA's political and developer allies, casting them as "greedy piggies" in a fable-style tale, whose grand plan for pulling one over on residents doesn't end well.

Another resident, Harold McDougall, said he and his neighbors are "afraid of losing our homes" to an eminent domain grab by a future ITA for BRT. "We're tired. We're just depressed," he said. He noted that BRT was ginned up by a small interest group of developers and "Rockefeller-funded advocacy groups. There's big shots on one side, and little people on the other."

Many felt the task force has failed to consider any other solution but BRT and the ITA. Harriet Quinn of Silver Spring said the task force approach "excludes a comprehensive look at our overall transportation needs." Dickter argued the County would be better off improving existing roads and Ride On, "instead of obsessing over [BRT]."

A large number of speakers promoted similar alternatives: free Ride On service (which would cost a fraction of what is proposed to be spent on BRT, has none of the administrative or personnel costs BRT and the ITA would add, and has proven successful on Metro, where diehard riders are those who receive free or heavily-subsized fare on the system), completing unbuilt master plan highways like the M-83 Midcounty Highway Extended (and shamefully tabled recently by the Leggett administration), car sharing services like Uber and Lyft, Bridj, Express Metrobus and RideOn Plus services (these are existing proposals), autonomous vehicles (in the future), and using technology to make roads and transit systems more efficient as Houston has done successfully, without spending billions or even millions.

Robert Nelson of the Goshen area said, "I see very little benefit to our area" in the Upcounty, noting that the M-83 would be far faster for Goshen residents trying to reach the Shady Grove Metro station than the BRT system.

Jean Cavanaugh of Silver Spring was one of many who cited residents' "rapidly-rising tax burden." That burden is increasingly a regressive one, and four of the five task force report's revenue proposals would tax residents.

Do we need four new taxes to pay?

This, on top of an already-looming property tax increase warned of by Leggett for next year.

Putting the ITA on the ballot to be decided by voters was suggested by several speakers, including James Williamson of Silver Spring. "Doesn't he trust the voters," Williamson asked of Leggett.

Eric Hensal termed the ITA debacle "red light district politics" by developer-funded elected officials who "cannot build a parking deck in Silver Spring." The ultimate goal of the ITA scheme, Hensal predicted, is to "socialize cost and privatize gains for the developer community."

Cherrywood HOA President Paul Jarosinski similarly described the ITA and BRT as a "bonanza for developers." The ITA sounds like "a good script for a crime movie," Jarosinski observed. "A parallel shadow government agency where you handpick five stooges."

Robin Ficker of Boyds, the man most responsible for the successful passage of the charter limit on property taxes approved by voters on the 2008 ballot, testified as well. "The Council is made up of a group of scaredy cats," Ficker said, delivering his remarks standing at the table as he does in court as a prominent attorney. "They're scaredy cats, because they know they can unanimously vote to exceed the charter limit," Ficker said, and would prefer an elected ITA take the heat from taxpayers instead. "They can never get enough money. That's all this is about."

Ficker also ripped the county's delegation to the state legislature for their failure to return sufficient transportation dollars to the County. "They're not doing their job in Annapolis," Ficker declared.

Stephen Poor summed up the feelings of most in the room, telling the task force, "You should just stop."

Pinning the future on BRT ignores the reality that cars are, and will continue to be, the dominant mode of transportation well into the future. Todd Solomon, who actually favors BRT, noted that - according to the Federal Highway Administration - a record number of vehicle miles were traveled by Americans in the first 6 months of 2015. And that a monthly record was just set this summer.

It doesn't sound like mass numbers of Americans will be "getting out of their cars" anytime soon. But will Montgomery County's elected officials be getting their hands out of our wallets?

The next move by the task force will be to begin their final review of the public draft report at their October 7 meeting.
Posted by Robert Dyer at 8:00 AM