Rockville candidates consider the increasing diversity in the City

How Rockville can meet the challenge of serving an increasingly diverse city population was a question posed to Mayor and Council candidates at Tuesday night's College Gardens/Woodley Gardens debate.

Council candidate Brigitta Mullican said that, in order to improve outreach to a diverse community, "the place to go is the schools."

Council candidate Beryl Feinberg agreed that reaching more residents is partly a location issue. She suggested city representatives "go to our ethnic stores," and that the City should host more ethnic festivals. Feinberg also suggested public information be provided not only in Spanish, but also in the many other languages spoken in Rockville. And she included the disabled as a population segment to which outreach is important, such as ensuring there are adequate sign language accommodations made in City communications.

"Diversity is what makes this city attractive to me," Council hopeful Clark Reed began. "I don't see as much diversity on commissions throughout the city," he noted. Reed echoed Feinberg's call for more ethnic festivals.

Incumbent Mayor Bridget Newton said, "Diversity is one of the main reasons [husband] Fred [Newton] and I stayed in Rockville." She said they wanted their children to grow up in a city that embraced diversity. Newton recounted the initial success her weekly Mayor's Book Club has had with ESOL students at Maryvale Elementary School. She said she was "amazed at the end of the year how much those children have learned."

Mayoral challenger Sima Osdoby picked up a theme she discussed at a debate last week - how national and cultural backgrounds can impact residents' views of their government and law enforcement. They might have grown up in countries where those institutions are feared, and be afraid to take advantage of public services. Osdoby said it was important to ask those residents "what they need from the city," and work with representatives of ethnic groups in the community.

And, as I reported yesterday, Council candidate Julie Palakovich Carr suggested the City study the possibility of allowing non-citizens to vote, noting that 1-in-3 Rockville residents was born outside of the United States.

The other council candidates, David Hill, Patrick Schoof, Mark Pierzchala, and Richard Gottfried were not asked this question at the debate, but please see my previous article for their answers to other questions. 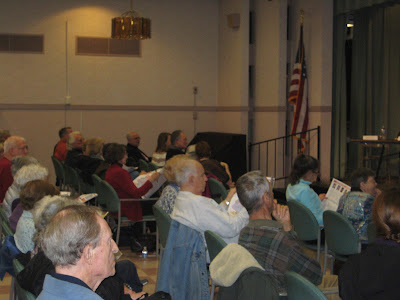