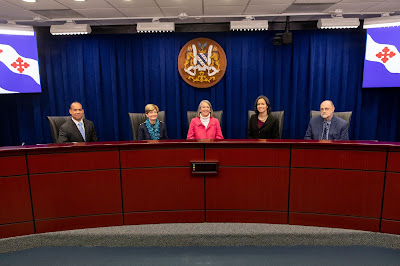 The State of Maryland Open Meetings Compliance Board has found that the Rockville Planning Commission violated the Maryland Open Meetings Act in its two closed sessions on November 5, 2018 and August 7, 2019. Rockville resident and former planning commissioner David Hill brought the matter to the board's attention last year, and their ruling has now been issued. Hill also informed the Mayor and Council of the issues and the ruling at their December 16 meeting.

Both Hill, and the West End Citizens Association, further argue that City staff actions and advice to the Planning Commission in regards to the closed sessions led to the violations, and failed to provide sufficient transparency to the public. WECA had actively participated in the public approval process of a development proposal for 107 W. Jefferson Street. Representatives of WECA were present at commission meetings during that process, in one instance waiting outside of the chambers during a closed session at which commissioners departed the room without returning to open session following their closed discussion.

The Mayor & Council will now discuss the violations and related issues at their January 6, 2020 meeting at 7:00 PM at City Hall. Hill is urging them to take some substantive action rather than let the OMCB's findings simply stand, as that body only determines whether the law was violated, but does not issue penalties. He also is requesting they investigate the actions of City Attorney Debra Yerg Daniel in the matter. "The City Attorney serves at Mayor and Council pleasure," Hill noted in his testimony. "That gives you supervisory responsibility of her conduct. As a citizen of Rockville and former commissioner, I call on you to discover why the law was broken, censure that, and fix it."

WECA is further recommending the Mayor & Council utilize an independent outside counsel to study the matter. The WECA board suggests that the approval of the 107 W. Jefferson Street development also be part of that independent investigation.

Mayor & Council photo via City of Rockville
Posted by Robert Dyer at 8:00 AM