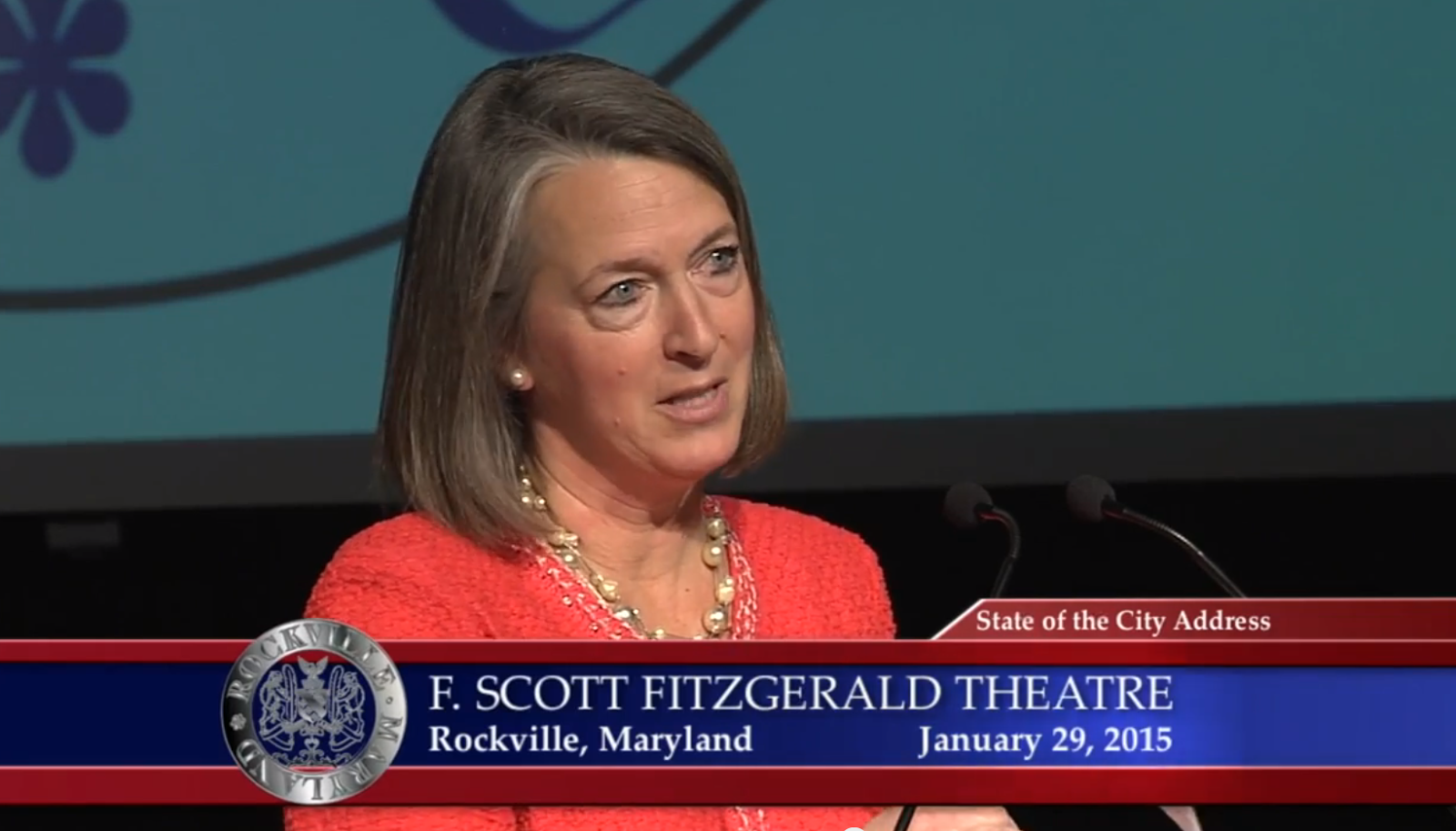 Mayor Bridget Donnell Newton delivered her State of the City Address last Thursday evening at the F. Scott Fitzgerald Theater, with the theme, Rockville: The City That Energizes. Her address touched on what's going right in Rockville, but also floated two ambitious proposals to improve the city in the future.

"The state of the city is strong," Newton proclaimed, and emphasized citizen involvement, city businesses, sound financial management, and charitable volunteerism as sources of that strength.

She said the Rockville Volunteer Fire Department will add a Pierce Arrow Pumper in a few months, and that the new Cambria Suites hotel will open in town center this spring. The latter is expected to boost tourist spending at town center businesses.

"We have a robust business community, which, in turn, supports the Rockville community," Newton said, underlining the county seat's diversity as a "multiethnic, multicultural, and multigenerational" city.

Referring to the city's strong finances, Newton noted that in FY2014, Rockville "finished with reserves in excess of 22% of next year's revenues." "We haven't raised our property tax in 7 years," she said.

She thanked the city's more than 1000 volunteers "who never seem to sleep," serving on Boards and Commissions, and at facilities and programs like the Rockville Senior Center. She reported the city's holiday drive raised $70,000 in cash, food and gift cards. In addition, Mansfield Kaseman Health Clinic served 2,096 patients last year.

Newton described Rockville's many neighborhood and civic associations as "the backbone" of the city.

In regards to economic development and jobs, the Mayor said that Rockville enjoys the "lowest unemployment rate in Maryland, just 4.4%." Referring to large scale redevelopment expected along MD Route 355 in the coming decades, she said "move over Potomac, here comes the Rockville Pike Plan."

The first and most ambitious, which had its genesis in the 1990s Imagine Rockville discussions, is to bury Rockville Pike where it passes the town center and Rockville Metro station. This would create public and green park space at the existing surface level, with the highway running beneath it. She said that would provide a safer passage for residents of East Rockville to the town center, and create green space that would again give Hometown Holidays room to be something bigger than the street festival it has shrunk to.

"Think of it as our own Dupont Circle," she said. Citing Klyde Warren Park in Dallas, Boston's Big Dig, and Portland's Harbor Drive as examples, she said her proposal could provide a similar boost to economic development, health and the environment, and quality of life in the city.

If such a plan could be advanced, it would give Newton a legacy project similar to that of past mayors like Doug Duncan (Rockville Mall demolition and redevelopment) and Larry Giammo (Rockville Town Square). She acknowledged it would be an expensive proposition.

The second big idea floated in Newton's address was transforming the "blighted" Montgomery County Public Schools property on Stonestreet Avenue into a mixed-income, owner-occupied townhome development. Newton envisions turning a space known for "tractor trailers...sitting there filled with old desks and old books" into "brownstones fronting Stonestreet, with garages and yards behind," providing needed affordable housing, while improving the environment for existing residents. She suggested the redevelopment could be facilitated and financed by a public-private partnership.

Citing the contentious public hearings recently held on the proposal to loosen school overcrowding standards in the city's Adequate Public Facilities Ordinance, Newton said, "People want a vibrant city. They don't want to further overburden their schools." She argued that the city needs to find new solutions to overcrowding that don't involve weakening the APFS. Among possible answers, she pointed to acquisition of the surplus of vacant office space in the county, requiring developers to pay more for school construction costs, boundary changes and demanding more property tax money back from the state. Ultimately, she predicted, it will likely require a combination of all of those avenues.

Countering arguments that the APFO has stifled new school construction in the city, Newton thanked the school system for the forthcoming new Richard Montgomery Elementary School No. 5, and renovations at Julius West Middle School.

"Together, we can do great things," she said.

You can watch the entire speech here: