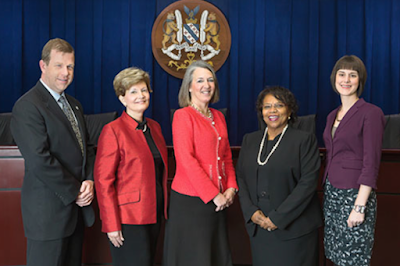 By the end of the evening, Mayor Bridget Donnell Newton and Councilmembers Virginia Onley and Beryl Feinberg were also less than satisfied with the options on the table after a Compensation and Classification study funded by the city.

Seeking more information as to whether a hybrid plan could accommodate step increases to any extent, the three sought to table the discussion until such analysis could be completed by consultant Evergreen.

Councilmember Tom Moore said such a move was impermissible under the rules. He said the Mayor and Council had already voted on that issue at a prior meeting, and that it was too late to reconsider that vote. Newton said she was "disappointed" that Moore did not want the body to obtain more information. "You lost that vote," Moore insisted, accusing his three colleagues of "blowing up" the discussion. "I didn't lose them, I didn't blow this up," Newton replied. "It is incumbent upon the Mayor and Council to ensure we receive all the information we need to make a decision."

"I suggest we take a break," to have the City Clerk review the transcript of the May 11, 2015 meeting where the vote(s) in question were taken, Moore insisted.

Onley said, "I think we can change our minds." The options on the table were Evergreen's, "not ours," Newton said. Onley then made a motion to table the discussion.

A motion to table would be inappropriate under Robert's Rules, Moore argued.

Moore turned to Onley and said, "This discussion was going great. I don't understand why all of a sudden...we're talking about ending the discussion. We were five minutes away" from reaching consensus, he said. Moore conceded that Newton, Onley and Feinberg were raising "legitimate questions," but "our votes matter."

A frustrated Onley fired back. "I don't want to say anything disrespectful...[but] five minutes doesn't mean a damn thing - and I apologize, because I don't usually talk like that - if we're not taking care of our employees."

Feinberg said "It is so vitally important to every staff member that we get this right. I want to do the right thing." She suggested a few months' delay would not have a major impact, as there are funds in reserve.

Moore was unconvinced. "We made that decision," he said. "Maybe you didn't like it, but we made it." He stated that he would prefer to approve the recommendations of Evergreen, and then consider "what is the best way to make up for six tough years."

Newton responded that "If there are a number of us who feel we didn't get the information we wanted," that it was appropriate to pause the discussion until that information could be furnished. She said the possibility of police sergeants making less than employees with less time was an example of why the city should consider a hybrid plan. She also said it was worth exploring whether steps would be less expensive than what Evergreen has proposed. "Getting it right matters a lot," she concluded.

The Mayor then said she would entertain Onley's motion to table the discussion.

"Point of order," Moore called out, saying there was another motion on the floor. There was disagreement as to whether that was accurate, requiring a consultation with the City Attorney, Debra Yerg Daniel. "Under our rules, it's the Mayor's call what happens," Daniel said, although councilmembers could appeal her ruling.

"We've spent twenty minutes hassling" over a dispute that could have been avoided if the Mayor and Council had received the information they had previously asked for, Newton said. She again entertained Onley's motion to table the discussion, which passed 3-2, with Moore and Councilmember Julie Palakovich Carr opposed.

"Before any money is spent with Evergreen," Moore said after the vote, "I would like an accounting of what it would cost." He also insisted that those seeking the information put their requests to Evergreen in writing, so that there would be no dispute when the Mayor and Council resume the discussion at a later date. They agreed to do so.

It was not known as of last night how much time would be needed to comply with the data requests.
Posted by Robert Dyer at 8:00 AM