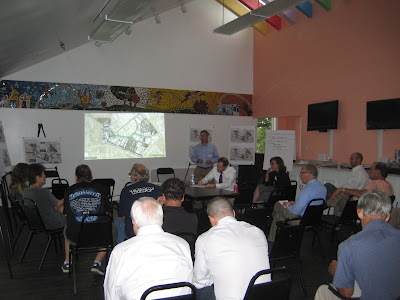 The industrial area is currently in a bit of a decline, according to statistics presented by Nancy Fox of VHB. In 2011, 945 people were employed in the Southlawn Industrial study area, down 17% since 2002. Most are in the construction field, she said. Of the 27 properties there, 3 are currently at least 50% vacant, the vacancy rate is 17% overall, and vacancies are trending upward in recent years. In contrast, industrial areas described as "North Rockville" and the "Rockville submarket" are trending in a more positive direction in terms of vacancy rates. 43% of workers in the study area live within 10 miles of Southlawn, and 11% live more than 50 miles away, Fox reported.

Dan Lovas of VHB gave an overview of the transportation data the team has gathered at this early stage, although he said they will be collecting much more over the summer. Right now, they've identified North Horners Lane as the road that appears to be suffering from the most "collector" and cut-through traffic related to the industrial area. He noted "we're not seeing really a ton of tractor-trailer activity on Horners," but rather, smaller trucks. Lovas said the study area has a "pretty decent sidewalk system" with some gaps, and an unusually-high number of bicycle facilities for an industrial zone. That includes 2 Capital Bikeshare stations. The goal in the study, Lovas said, will be to better connect all of these bike facilities.

The floor was opened to attendees, who had a variety of concerns. One immediate question was, why wasn't the entire industrial area along Gude Drive being included in the study. Susan Swift, Planning and Zoning Director for the City of Rockville, said the study was intentionally limited to the area in question. She said this specific industrial zone had been a problem area for residents on 3 occasions over the last 15 years. Those controversies led to a call for a study of this type.

"What we were attempting to do was follow up on the study requested," Swift explained. In light of the study area's proximity to residents, the city hopes the study will "interface with the problems, the opportunities, but - frankly - the problems of the industrial and residential being so close to each other," Swift said. The most recent flareup was related to a self-storage facility proposed for the property next to Maryvale Elementary School.

One resident replied that he did not feel there was animosity toward the businesses. In talking to 200 of his neighbors related to a neighborhood issue, he said only 1 expressed negativity or a desire for the industrial area to be replaced. Fox noted during her presentation that many of the businesses support the local community, such as providing repairs and services.

Paul Mayer of VHB said concerns about the industrial use being eliminated were premature. The idea of the industrial use disappearing at Southlawn is "not a realistic expectation," he said. However, he added, the study will examine what the current market forces and trends are in the Southlawn area, and how they might be changing.

Going forward, Mayer said, there will be another public meeting in September. Between now and then, VHB will gather more traffic data, hold interviews with stakeholders, assess property values, and develop land use alternatives.
Posted by Robert Dyer at 8:00 AM