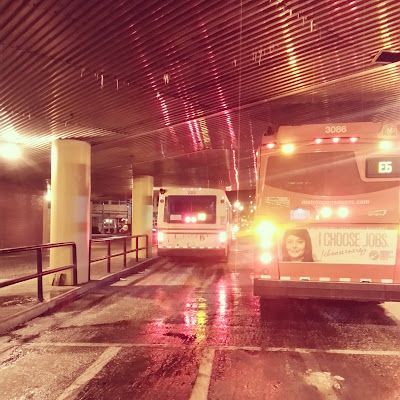 A public hearing on perhaps the most controversial issue in Montgomery County - the proposal for an unelected Independent Transit Authority with unlimited taxing power to fund an equally-controversial $5 billion Bus Rapid Transit system - won't give every citizen a chance to speak, it turns out. A document uploaded to the County Executive's Transit Task Force website now says the number of speakers will be capped at 40. To quote the document, "It is planned that 40 people will be able to present their views during the Public Forum."

A May 23 memo from County Attorney Marc Hansen leaves gigantic loopholes you could drive a (rapid) bus through.

It claims, for example, that the unlimited eminent domain authority the ITA would wield is limited by Bill MC 24-15.

Hansen states that the legislation "places an indirect limitation on the Transit Authority’s power to condemn, because it requires that the Authority submit a 6-year Capital Improvement Program (CIP) to the County for approval."

Whoops. Check out the actual legislation posted on the TTF website. On Page 5, Item 6 of the proposed legislation, it only says that the County "may include a requirement" for submission of a 6-year CIP. "May" does not equal "requires".

It also does not require the ITA to submit any budget for review by anybody. On Page 6, section II, it clearly states this: "MAY NOT REQUIRE THE TRANSIT AUTHORITY TO SUBMIT ITS CAPITAL OR ITS OPERATING BUDGET TO THE COUNTY FOR APPROVAL" (italicized emphasis mine).

To that broader lack of accountability, later in the memo Hansen clearly admits "The legislation specifically prohibits, however, the County from requiring the Transit Authority to submit its capital and operating budgets to the County for approval."

One other controversial provision Hansen does acknowledge is the proposed power of the ITA to create unlimited debt. This provision will, in Hansen's words, "prevent debt incurred by the Transit Authority from being considered as County debt by bond rating agencies."

Do the math - unlimited debt with no fear from County Council members of losing their AAA bond rating. Unlimited power by the ITA to raise taxes on you to pay back their unlimited debts. What could possibly go wrong, right?

Well, conversely, how about if the ITA somehow went bankrupt? Who would be left holding the bag for an unlimited amount of debt? It seems that the taxpayer loses under any outcome.

The document notes that state legislation may be written to create the taxing authority as soon as early September. It states that a second public hearing will be held in September, as well.

Written statements are being encouraged by the document, which civic activists recognize are utterly useless, as the general public and media rarely examine written statements submitted at these hearings. If it isn't heard live, or reported in the media afterward, it essentially is the proverbial tree falling in the forest.

Important to note if you plan to (try to) speak at this forum - you must sign up online by noon on June 17, by calling 240-777-7165. The hearing will begin at 6:00 PM on Wednesday, June 17 in the 3rd Floor Council Hearing Room at the County Council office building, located at 100 Maryland Avenue in Rockville.
Posted by Robert Dyer at 8:00 AM