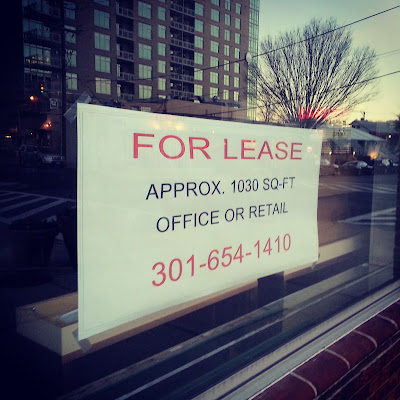 It's not news to landowners, developers or readers of this blog that Montgomery County's office space market is as moribund as its economy. But the county's Planning Board is scheduled to be briefed on the dire situation during its meeting this Thursday, June 25. An advance copy of consultant Partners for Economic Solutions tells just how bad it is, and makes recommendations of what to do next. Unfortunately, it sounds like the report's authors are mostly telling County officials what they wanted to hear.


Interestingly, downtown Rockville is noted as one of the few bright spots in the County office market by the report.

But some of the report's analysis and suggestions are off base. For example, one approach PES suggests is simply giving up on office space and converting it to residential. While developers and planners have already been taking that approach from Bethesda to Wheaton to Clarksburg, to continue on that path will generate a transportation disaster. Roads and Metrorail already overwhelmed by the current volume of commuters cannot handle a county where all the jobs are in DC and Virginia. Smart growth demands jobs be created, not vacated, across Montgomery County to reduce commuting distance. Instead, according to the report's data, MoCo planners and councilmembers have allowed 558,000 SF of planned office space to be canceled or converted to residential. And notes only a handful of the many planned projects and existing office spaces being converted to residential or canceled. We're literally becoming the DC area's ultimate bedroom community.

Secondly, the impact of telecommuting and shrinking office sizes are grossly overstated. The report attempts to partially blame those trends for vacant office buildings. But the same report acknowledges that the vast majority of jobs created in recent years are in retail and restaurants. You can't fold jeans or make a frappucino over the internet. There were no great numbers of private sector, high-wage jobs added in Montgomery County over the last decade. So you can't say telecommuting is the new normal when few of the new jobs can be done from home.

Thirdly, it also oversells the success of office space in high density urban areas within Montgomery County. While downtown Bethesda and Silver Spring indeed are desirable locations for employers, neither have attracted a major corporate headquarters in over a decade any more than the suburban areas of the county did. Wheaton is right on the Red Line as well, but is also a dead zone for office space.

If transit was the sole determining factor, Wheaton would be doing well. In fact, the report concedes this point on Page 40. It also notes that Wheaton and Glenmont are not convenient to I-270 and I-495, but fails to point out that two planned freeways (Rockville Freeway and Northern Parkway) that would have given both immediate access to the freeway system were canceled by the county decades ago. Whoops.

The report states - contrary to the current County Council's stated "transit-only" future, and its own final recommendations: "Subareas that can offer Metro and good roadway access within a walkable mixed-use environment will be the markets that recover most quickly."

Meanwhile, the Pike District of North Bethesda has been designed in the New Urbanism model for smart growth and walkable communities, and is on the Red Line as well. Yet it, too, has failed to attract a major corporate tenant. The only significant addition was a reshuffling of Bank of America/Merrill Lynch from Tower Oaks to Pike & Rose, which is simply rearranging the deck chairs on the Titanic. Strangely, the report claims a severe drop in the "White Flint" vacancy rate, without providing any data on what specific real estate and leasing moves account for their claim. Highly suspect.

If new urbanism and transit are so hot for employers, why is the Pike District utterly tanking for new corporate office space? Why are a gleaming new Class A office building at 4500 East-West Highway, and a revamped one at 7550 Wisconsin Avenue - both walking distance to the Bethesda Metro station, restaurants and nightlife - mostly vacant?

Finally, the report closes with a waving-the-pom-poms endorsement of the current County talking points for vibrant, walkable urban developments with transit, and infill development. That's great. But if you strip the corporate, government and government contractor jobs out of DC and Northern Virginia, guess what? They would both become ghost towns like the report claims single-use, auto-dependent suburban office parks are now in Montgomery County. All the window dressing and vibrancy in the world doesn't make a difference if you don't have any jobs or affordable housing for young professionals.

Yet the report suggest abandoning current and planned office space in places like Glenmont and the northern I-270 corridor. That suggestion is contrary to smart growth.

I'm not saying it isn't good to have great urban areas. We have them, and they are working well in many respects. But to claim that urbanizing the rest of the county is the magic solution to attracting jobs is disingenuous.

We have to look elsewhere to find the answers. The authors of the report have partially conceded this in briefly referring to road access. They've noted that more successful jurisdictions are offering better incentive packages. It costs too much to operate a company in Montgomery County and the state of Maryland. Gridlocked roads drive up the costs of labor and shipping, among other expenses. There's a reason you get charged your shipping rate by zip code - you pay more when you live in an area with congested roads.

And we need to target industries like defense and aerospace that are never going away. They happen to need the kind of larger square footage that the I-270 corridor and upcounty can provide - research labs and testing and manufacturing facilities won't fit in tiny urban footprints. The report does not even consider those types of employers, much less Fortune 500 companies, and buys into what our local elected officials and Wall Street crooks keep trying to sell the American people on - that the future is only in the "knowledge economy" and small companies. Wall Street outsourcers, Warren Buffett and China certainly are hoping you'll believe them.

Many parts of the report sound as if the writers had been briefed by County officials and politicians, rather than taking a completely detached and independent look at the situation. They should not be referring to the failed Nighttime Economy Task Force at all, much less praising its utter failure. Those apparent communications have tainted the objectivity of the report.

And nowhere does it mention one of the County's major traffic and economic development liabilities - the lack of direct access to Dulles International Airport. It's impossible to take seriously a report that doesn't talk about that at all. You know about the Nighttime Economy Task Force, but say nothing about the competitive disadvantage of lacking access to the preferred airport of international businesspeople and corporations?

Again, this suggests the research process was poisoned by political interference. "Don't you dare talk about Dulles Airport or new Potomac River bridges in this report, do you understand?"

There is a lot of valuable data in this report, but its final recommendations are too tailored to what the Montgomery County political machine and its developer patrons want to hear. A report that tells us to keep going the way we are currently going is not going to bring about change.
Posted by Robert Dyer at 8:00 AM