Montgomery County has failed to attract a single major corporation to relocate here in over a decade. Much less draw a Fortune 500 company. The county's elected officials have yet to be called on that record of failure by the local media. But in public comments on economic development, many of those officials - and their political operatives - have argued that we don't need Fortune 500 companies in our future. Instead, they've said they're focused on small ventures in small offices. Indeed, a recent economic development effort to fill vacant office space in the county was limited to small companies only.

Are Fortune 500 companies "overrated", as these folks suggest?

I would say the answer is clearly, "no." Large corporate headquarters are not only sources of high-wage jobs, but also generate economic activity in other sectors around them, from hospitality to finance to real estate. More importantly, Fortune 500s can serve as halo companies, economic development trophies that can attract companies of similar caliber or aspirations.

But enough about what I think. There was a great article by Ana Swanson in the Washington Post Business section recently that backs up what I've been writing about economic development and Fortune 500 companies since 2006.

The county has also struggled to attract and foster startups. It recently booted several startups from a facility it owned in Rockville to make way for a cybersecurity center there. That won't build trust in Montgomery County among entrepreneurs. Should you commit to an incubator you might get kicked to the curb from next year?

And how strong is Montgomery County as a cybersecurity brand around the world? Councilmember Hans Riemer has talked a lot about cybersecurity. But then it was revealed that the county government was running on Windows 2000 last year, four years after cybersecurity "guru" Riemer took office. A county that runs on perhaps the most vulnerable operating system in the world should probably not be talking about cybersecurity.

Is the information economy bigger than Fortune 500s? Not quite.

"For all the buzz about start-ups and small business in the United States, the massive corporations of the Fortune 500 are actually more important to the economy than ever," Swanson reported.

Should we be depending on small business to create the high-wage jobs the county has failed to attract over the last decade in the private sector? Not according to Swanson.

"Although politicians often talk about the importance of small business creation, most U.S. jobs do not come from start-ups," Swanson asserted. "According to research from George Mason [University], half of all jobs generated by newly formed companies disappear after five years."

With all of the solid evidence that we are on the wrong track, why are our elected officials so blasé about attracting Fortune 500 companies? The most obvious reason is to distract from their utter failure to attract any. "We don't need them anyway," they'll suggest, hoping to continue to get a free pass from the media.

But a second reason is increasingly becoming clear: corporate headquarters take up large real estate footprints. That's land that developers could make a lot of money on with residential development, not office space.

With the vast majority of councilmembers beholden to the developers who fund their campaigns, it's not surprising they're heading in the direction of making the county the region's ultimate bedroom community. "Live-Work-Play" is rapidly devolving into "Live-Drive-Pay", as more commuters are living in, but working outside of, Montgomery County.

That the "independent" office market report prepared for those officials would echo their call for converting most office space in the county to residential housing is not a surprise. That they can continue to get away with an economic development policy that appears to be at cross-purposes with reality and common sense is. 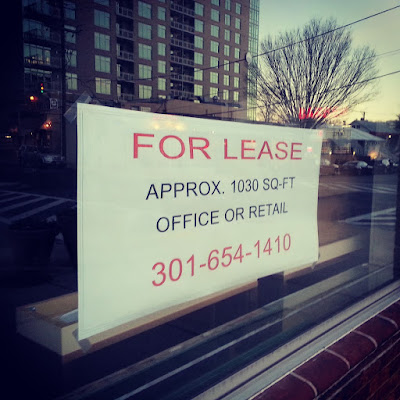