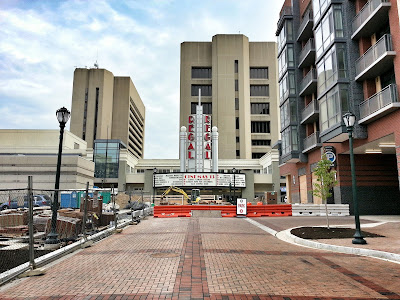 The decision on what - if anything - to rename Renaissance Street to in Rockville Town Center has been delayed again by the Rockville Planning Commission. Last night, representatives of Choice Hotels appeared before the commission in person. Previous discussions, at which Choice did not appear to personally plead the company's case for the name change, were unsuccessful.

Despite the in-person plea, the commissioners did not find the present options any more appealing than they were a few weeks ago. Commissioner Charles Littlefield, echoing the efforts of many in the community to establish a Rockville Science Center and promote science in the city, suggested Galileo as a potential alternative. Chair Don Hadley said he didn't think most people visiting the street were there for science. Hadley and some commissioners thought Hospitality might be an appropriate name. He said it would show the city's appreciation for Choice locating its headquarters there, and also emphasize that the town center is a welcoming place.

Commissioner Jack Leiderman wasn't as enthusiastic, noting that there are Hospitality Ways all over the country, "one off every off-ramp." He said he wasn't so much concerned with having a name that reflected a particular industry, as having one that was specifically related to Rockville. "I'd like some more choices," Leiderman said.

More choices are what the commission will get, a Choice representative promised. "I appreciate that none of these names resonate with the [commission]," he said. He added that the company was very appreciative of the commission's time in taking up the request, and that it is very important to them. Choice will now try to generate some additional name possibilities over the next couple of weeks, and submit them to city staff.

The commission will then revisit the discussion of the change at its July 22 meeting, Staff Liaison Andrew Gunning said.
Posted by Robert Dyer at 8:00 AM