First Street Bridge to be replaced in Rockville 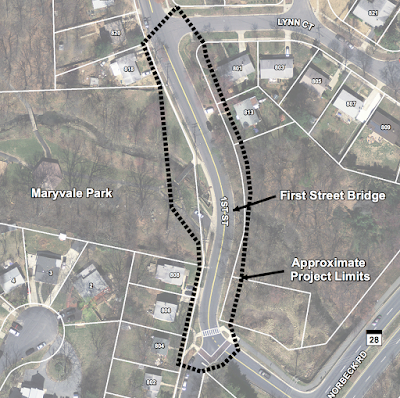 The City of Rockville is preparing to replace the First Street Bridge in East Rockville. Expected to begin last fall, the nearly $1.5 million dollar project has been delayed. The replacement was recommended after an inspection of the bridge by a city consultant in 2012.

Residents can attend a public meeting tomorrow night, October 1, 2015, from 6:30-7:30 PM, at the somewhat unusual location of the First Street entrance to Maryvale Park.

Photo courtesy Rockville Department of Public Works
Posted by Robert Dyer at 8:00 AM