MoCo Council budget: So easy, a caveman could do it 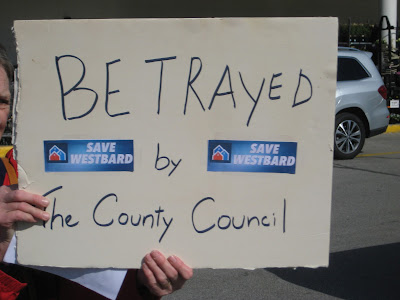 Being sold as an "Education First" budget, it is in fact exactly like every other budget this Council has passed, except costing you a lot more than ever before. Forget that the Council has just robbed your bank account, or is slamming the working family trying to refinance their mortgage with a recordation tax. The budget that pulls off the 100 Maryland Avenue equivalent of The Italian Job promises to flush $90 million more down the Montgomery County Public Schools toilet, where schools have been in decline since 2010 according to the report by the Office of Legislative Oversight.

Great. But how does that make any sense without a definitively new plan to spend it? The budget will reduce class sizes by 1 or 2 students at some schools. It will add more auxiliary personnel, not actual teachers. But that's it. There's no new strategy to tackle the achievement gap here, just more expensive deck chairs being added to the Titanic.

Where is the universal Pre-K? Where are the additional early education initiatives? Where are the new partnerships with high-wage employers? Hint, none of these sure-fire solutions to the achievement gap are in this massive tax hike budget.

We will only have standardized tests to gauge student results at this point. I agree that testing has been oversold in recent decades. But, ironically, by recently dumbing down its grading system and eliminating final exams, MCPS has only now increased the importance of standardized test scores. If all of the classroom work is going to be graded with the new powder puff grading scale, grades are almost certain to rise across the board. That's not improvement, nor is it how education works. Outside of MCPS, such tactics are correctly termed, "cheating."

As far as school construction funds generated, note that the Council is raising those funds from you, not from the developers who are creating the need for more classrooms and schools. They didn't have the guts to go after the developers who provide 80% of their campaign funds, but they were eager and ready to pick your pocket.

Moreover, the Council has just dug us deeper into the structural deficit hole that we already had no immediate ability to climb out of. By going so far over the Maintenance of Effort requirement, we will now be required to match or exceed that level of spending next year, and in perpetuity. This was not leadership. It was a reckless, irresponsible vote passed to cover the Council's fiscal irresponsibility over the last two decades.

Did the Council make "history," as they claimed? Yes, in two regards: They have finally triggered the ultimate tax revolt, by unanimously voting to exceed the charter limit. The brilliance of the Ficker Amendment that created that cap is that each councilmember becomes the deciding vote when all 9 agree to exceed the cap.

And secondly, Council President Nancy Floreen made history by giving the longest speech regarding the passage of a budget I've ever heard. Ms. Floreen and her colleagues should probably save their "emotional" speeches for the 2018 election, when they have to actually face the voters.

All they did was pick the pocket of the taxpayer, rob your bank account, and kneecap County employees by breaking signed labor contracts the Council had agreed to pay. Even a caveman could do that. I've heard complaints from individual teachers, first responders and other County employees. But where are the comments from union leaders in the County? Where's the outrage? This was a horrible deal, and a horrible precedent for labor. If you want to limit wages, that's something you proactively do when you negotiate and approve labor contracts. Breaking contracts is beyond the pale.

Being an incompetent councilmember, and then robbing the taxpayer and County employees to make up for it, is not leadership. It is not ingenious. It is not wise. It is cowardice. It is impotence. It is contempt for your constituents. It is a firing offense.

The term limit petition proposed for the ballot this fall may give voters the chance to give at least a few of the pink slips this Council so richly deserves.