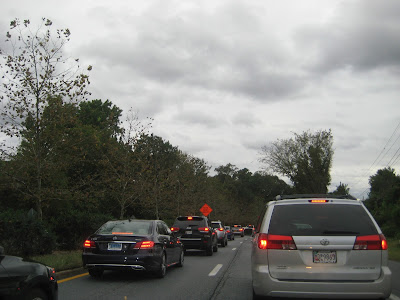 The failure of the Montgomery County Council to complete the County's master plan highway system is costing each resident an average of $1834 per year, according to a report released this week by the national transportation research non-profit TRIP. You lose about 82 hours a year idling in traffic jams, the report says, and the incomplete road network is costing Maryland $4.1 billion dollars a year in lost productivity and wasted fuel.

How much fuel? 85 million gallons. Which translates into significant additional pollutants and greenhouse gases that would not exist if traffic could keep moving smoothly.

According to the TRIP study, Montgomery County is home to the worst bottleneck in the state, at the Capital Beltway and I-270 spur in Bethesda. The Council's failure to build a planned Potomac River crossing north of the American Legion Bridge, and the Midcounty Highway Extended (M-83) - among other unbuilt freeways - creates traffic jams averaging 12.3 miles in length at the spur, lasting an average of 168 minutes per day there.

TRIP's latest numbers on vehicle miles traveled show most commuters still aren't "getting out of their cars." Vehicle miles traveled haven't declined in Maryland - in fact, they've increased: 12% since 2000, and 2% in the last 12 months alone. Metro ridership has declined over the same period. The report forecasts that VMT will increase another 20% by 2030, requiring new highway capacity to meet the demand.

VMT increases almost 1% for every 1% of added population in Maryland, a damning statistic for those who claim that infinite growth is possible in Montgomery County.

Other County bottlenecks caused by unbuilt highways on TRIP's list include the Beltway at Connecticut Avenue (unbuilt Northwest Freeway, Outer Beltway, Rockville Freeway, I-95 through D.C.) in Kensington and the Beltway at Georgia Avenue (the unbuilt roads mentioned for the Connecticut exit, plus the unbuilt North Central Freeway and Northern Parkway) in Silver Spring. Multiple other I-270 interchanges made the list, as well.

The report notes that a 2013 survey of corporate executives found that Highway Accessibility is the top factor - after skilled labor - that firms consider when relocating their headquarters. Montgomery County has failed to attract a single major corporate headquarters in almost 20 years.

"Increasingly, companies are looking at the quality of a region’s transportation system when deciding where to re-locate or expand," the report says. "Regions with congested or poorly maintained roads may see businesses relocate to areas with a smoother, more efficient and more modern transportation system." Intelsat reportedly was considering moving its D.C. headquarters to 4500 East-West Highway in Bethesda, but ultimately chose Tysons with its superior highway access with Express Lanes, and direct highway access to Dulles Airport. In the near future, there will also be direct Metro access to Dulles from Tysons, to boot.

"Highways are vitally important to continued economic development in Maryland," the report argues, "particularly to the state’s tourism, agriculture, energy and manufacturing sectors."

The only good news in the report is that Maryland Gov. Larry Hogan's emphasis on addressing failing infrastructure appears to be bearing immediate fruit. There were 97 bridges rated "structurally-deficient" across the state in 2012; that number has fallen to 69 during Hogan's first term.

“From Governor Hogan’s $2 billion investment in highways and bridges to innovative projects and practical design, Maryland is committed to improving safety and reducing hours lost every day to congestion,” Maryland Secretary of Transportation Pete K. Rahn said in a statement reacting to the TRIP report.

But without completing Montgomery County's master plan highway system, economic development and quality of life will continue to decline. “Without additional transportation funding, Maryland’s transportation system will become increasingly deteriorated and congested, the state will miss out on opportunities for economic growth, and quality of life will suffer,” TRIP Executive Director Will Wilkins said in a statement.