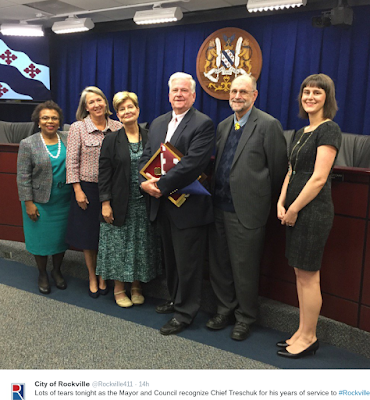 Terry Treschuk, who has spent the last 27 years as Chief of Police in Rockville, was recognized by the Mayor and Council last night for his service to the City. "I begged him not to go," said Mayor Bridget Donnell Newton, who called the occasion "bittersweet."

An emotional Treschuk accepted a Rockville flag and the key to the city. "I'm just speechless, which isn't like me," Treschuk said at the podium. "I'm still in the city, and I'll be coming to Community Forum," he said to laughter.

Image courtesy City of Rockville via Twitter
Posted by Robert Dyer at 10:00 AM