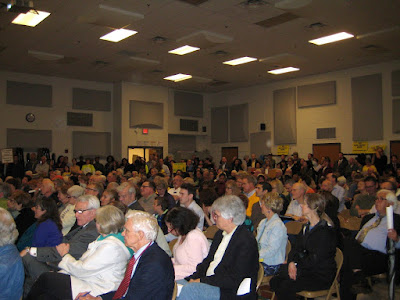 Montgomery County Councilmembers George Leventhal, Sidney Katz and Marc Elrich - all of whom attended the Carver bus depot meeting Wednesday night and said they opposed using the Carver Center for bus parking - have now asked their colleagues to put the required Declaration of No Further Need for the existing bus depot on the June agenda.

The Council must vote to approve a DNFN before the County can sell the current depot site to a developer that is preparing to redevelop it as residential. In a memo, the three say that putting it on the agenda will allow for a thorough discussion of an issue that has concerned several neighborhoods, including those around the Carver site, Lincoln Park (where a second depot is being proposed at 1000 Westmore Avenue) and Aspen Hill (where the potential use of the Avery Road site would likely push the alternative education Blair Ewing Center to the English Manor school).

Residents, the councilmen write, have been left "angry and confused" by the process and uncertainty. Wednesday night's meeting did little to reduce either. It also became apparent that, according to the councilmen themselves, they did not read the resolution they voted to approve February 9, which funded conversion of Carver to a bus depot.

At the conclusion of their memo, which also went to County Executie Ike Leggett and the Board of Education, the councilmen ask the BOE to "cease any and all activity related to the proposed Carver site."

The memo is a step forward from the buck-passing Wednesday in providing at least two concrete next steps. But those will depend on how the Council and BOE act and or vote in response to the memo. Can the Council legally back out of the agreement, can that action withstand a legal challenge from the developer, and if they lose, where will the buses go?

Stay tuned.
Posted by Robert Dyer at 9:17 AM