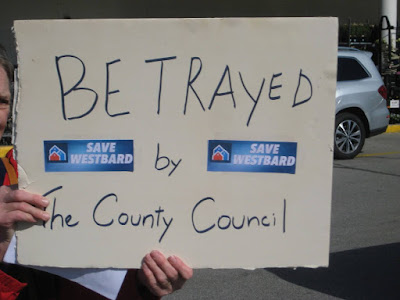 Montgomery County public employees and their union leaders packed the County Council hearing room last night, to testify against an anti-labor bill that finds some on the Council in an unholy alliance with the far-right Koch Brothers. The bill, introduced by Council President Nancy Floreen, would gut collective bargaining rights of County employees, and replace neutral arbitrators who have expertise in labor negotiations with retired judges.

Many expressed shock that a bill with language inspired by the Koch Brothers' American Legislative Exchange Council (ALEC) would even be entertained by the County Council. The move by the Council has gotten the attention of labor officials at the highest level in the country; Tefere Gebre, Executive Vice-President of the national AFL-CIO, testified in person. He carried with him a letter from AFL-CIO President Richard Trumka. Gebre said it was unusual for Trumka to weigh in on a local issue like this, but that the Council's bill is "so egregious," the statement was necessary.

"I shouldn't be here tonight," Gebre said. "There is no need for me to be at the Montgomery County Council" to oppose anti-labor legislation, he said. A Silver Spring resident himself, Gebre noted that even the title of Floreen's bill is worded like ALEC's model Public Employee Bargaining Transparency Act. The text of the bill itself is a "cut-and-paste" job from the Koch Brothers organization, he said.

"The entire labor movement is keeping an eye on what you are doing," Gebre warned. "It breaks my heart that this Council is entertaining this."

Such a high-level emissary having to chide the Council was almost overshadowed by typical antics from Councilmember George Leventhal. At the hearing's outset, Leventhal requested the floor before anyone could testify. Knowing the auditorium and television audience was at its peak, Leventhal proceeded to hijack the hearing, to unleash an attack on public employee unions for a recent robocall. His monologue, read off of a prepared script, went on for nearly ten minutes.

When Gino Renne, President of the main County employee union UFCW Local 1994 MCGEO, was called up to testify later, he asked if he could have additional time to rebut Leventhal's attack. Floreen denied the request, saying Renne could use his allotted three minutes however he wished, but could not have a separate rebuttal. "So he can make gratuitous statement with no response?" Renne asked.

Renne made a point that was heard not only from many speakers, but from those in the crowd, as well - that most County employees are also taxpaying residents. "70% of our membership resides in Montgomery County," Renne said. "Let's stop demonizing them for not doing their fair share."

County resident Richard Kirschner, a longtime labor law practitioner, charged the bill was "extracted from ALEC," and would be "Draconian in its consequences." The idea of conducting collective bargaining in public, one aim of the bill, is "absolutely, completely absurd," Kirschner said. He said Floreen had failed to provide "a single piece of empirical evidence" to justify her bill.

Judges, Kirschner added, do not have the expertise in labor agreements that the current neutral arbitrators possess. To some judges with no labor background, he said, "factory is a compound word, preceded by 'Cheesecake,'" which drew laughter from the crowd. Justin Vest of Progressive Maryland said having retired judges rather than neutral arbitrators would "call that neutrality into question."

Jeffrey Buddle, President of the Montgomery County Career Firefighters Association IAFF Local 1664, said the bill would do "meaningful harm to County employees," and that "all of the trump cards would be dealt to the County" in future bargaining. IAFF 1664 has only arbitrated twice, Michael Rund of the Professional Firefighters of Maryland pointed out. In his experience, none of the jurisdictions he has participated in negotiations in has the three-person arbitration panel proposed under this bill. And taxpayers would now have to pay for three people to do the job currently performed by one, he said.

Two firefighters provided emotional testimony against the bill. Brock Cline, currently working out of Station 26 on Democracy Boulevard in Bethesda, mentioned his two small children were in the audience. Cline said he and his wife "work alternating shifts to take care of them." He said they live in a modest house, and he drives a model year 2000 car. "It is all we can do to keep living in Montgomery County," Cline said. The crowd rose to give Cline a standing ovation.

Robert Ford, a career firefighter since 1992, said that given the dangerous work firefighters do and the impacts on their health, he is very concerned that the bill would "hamper...health and safety negotiations."

William Mitchell, speaking on behalf of MCGEO, disputed the frequent criticism that County employees are receiving pay packages that are overly generous. He said that County Ride On bus drivers will actually earn $200,000 less than their Metrobus counterparts over their careers, even though they drive the same roads. Also challenging the assertion that County employees are living large was Darrell Carrington, representing
ASCME Council 67. Most expenditures by public employees are for food and medicine, Carrington said, "not even thinking about vacations or fancy things like that."

A 30-year County employee, Dianne Betsy, has worked in the Department of Libraries since 1990. She called the Council bill "a slap in the face to all County employees." Noting that many County workers had to give up pay increases they were entitled to in FY-2017, she said "the Council decided we didn't deserve the raise. Rather than reward our hard work and loyalty, we are again being attacked" by the Council.

Her colleague Patricia Buck took time off from her library job to testify, and said it was the first time she had ever spoken before the Council on a matter. Referring to terms used in the County code regarding labor relations, Buck suggested the bill "does not feel at all 'harmonious' or 'cooperative.'"

"I don't think Ms. Floreen understands the process of collective bargaining," County employee Leon Walters said. He asked why the Council would be "helping the likes of [Wisconsin Governor] Scott Walker, rather than helping our County employees."

Al Vincent, Jr., representing UFCW Region 2, called the bill a "horrible attack on the rights of UFCW workers." He ripped the Council for allying with the Koch Brothers and their ALEC organization. "Will you follow, and ride on the backs of ALEC?" Vincent asked them.

The fact that the Council has to defend its adoption of ALEC model legislation "is in itself damning," said Stuart Applebaum, representing both the UFCW and the Democratic National Committee. "We can't understand why our elected leaders would associate with ALEC and their ideas," said Carlos Jimenez of the Metropolitan Washington Council of the AFL-CIO.

Maryland State Fraternal Order of Police President Vince Canales confessed he was in disbelief that the Council would consider the bill. "I'm puzzled and amazed," he said. "We're in Montgomery County - this is Montgomery County," he repeated incredulously.

Kevin Heenan, an employee with the County Department of Corrections and Rehabilitation, said the Council's actions are "not necessarily shady, but must be seen as suspect." He encouraged people to consider the term limits question that's likely to be on the ballot this November. Jimenez also predicted political storm clouds on the horizon for the Council, arguing there is no room for a councilmember who would support ALEC.

A former five-term VP with MCGEO (and a founding member), resident Larry Dickter said that "hateful us vs. them" rhetoric "may be worthy of the Trumps of the world, but should be beneath" the Council. Personalizing the debate, Dickter asked councilmembers who support the bill to "find the unarmed security officer who came here tonight to protect, and God forbid, even take a bullet for you...And tell him you need to cripple his union to keep him from getting ahead."

It seems unlikely that this bill will find the support to pass, but it is another clear indicator of the rise of a new kind of Wall Street Democrat both locally and nationally. First Councilmember Hans Riemer got elected with financial backing from Mitt Romney's Bain Capital and Danaher Corporation, two pioneers in outsourcing American jobs to China (among many other Wall Street firms and lobbyists who filled the Riemer campaign fund).

Now several councilmembers, incredibly, are teaming up with the Koch Brothers on this initiative. The bill and discussion last night from the dais also reminds one that Floreen and Leventhal are currrently jockeying for the endorsement of the anti-labor Washington Post editorial board, in the 2018 County Executive race.
Posted by Robert Dyer at 8:00 AM