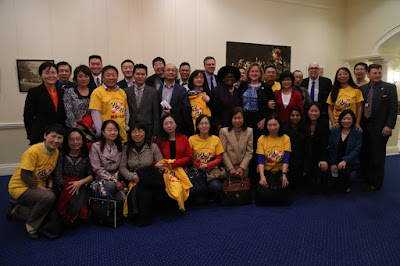 A House of Delegates bill that would officially designate Maryland a sanctuary state for illegal immigrants ran into opposition from legal immigrants Tuesday, who waited out an epic public hearing that lasted until the early hours of Wednesday morning. The House Judiciary Committee convened at 1:00 PM for an agenda that included a hearing on the "Trust Act," HB 1362. Chair Joseph Vallario (D - District 23B) appeared to stall the hearing in an attempt to wear out citizens who had traveled far to testify, not taking up the bill until 7:00 PM.

Dozens of citizens spoke in opposition to the bill, including 35 legal immigrants organized by the Maryland Chinese-American Network and Asian-American GOP coalition. Speakers also included Hessie Harris, an African-American woman from Silver Spring.

Some of those testifying questioned the fairness of exempting those who did not come here legally from the law. "I love Montgomery County," testified Shawn Nie of North Potomac. "I legally obtained my citizenship through a lengthy and expensive process."

Montgomery County Republican Party Chairman Dick Jurgena called the marathon hearing "one for the record books," and praised those who stayed until midnight and beyond to testify despite the wait.

HB 1362 is among several legislative efforts to codify sanctuary policies in Maryland, Montgomery County and the City of Rockville currently proposed. Police in Montgomery County are already not allowed to inquire about a person's citizenship status, even without this bill.

Proponents of the policy, and this bill, say the community is safer when undocumented immigrants don't fear interaction with the police. Opponents point to several horrifying crimes that have occurred within the last year, which have been tied to illegal immigrants.

In April 2016, Montgomery County Police arrested two illegal immigrants living in a County Housing Opportunities Commission apartment in Wheaton. The men were charged with abducting a 12-year-old girl, and gang-raping her in that taxpayer-subsidized apartment.

Just last month, 15-year-old Gaithersburg resident Damaris Alexandra Reyes Rivas was found dead in Fairfax County. Her mother told police she had become involved with MS-13 gang members at Watkins Mill High School, before disappearing December 10. Fairfax County police say Reyes Rivas was held prisoner by the gang before being assaulted in an undisclosed fashion, and was executed by them around January 8. Her remains were found in an industrial park on February 11.

After the Judiciary Committee issues a favorable or unfavorable report on HB 1362, it will return for a second reading on the House floor, and consideration for amendments by delegates.

Photos: Xiaoyuan Luo/World Journal
Posted by Robert Dyer at 8:05 AM