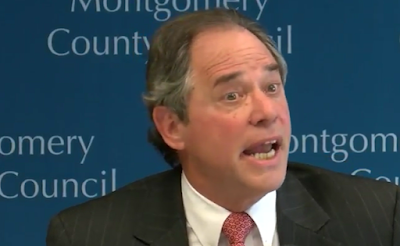 After hiding from their constituents and the press for four days, Montgomery County elected officials yesterday began to react to the alleged gang rape of a 14-year-old girl by two illegal immigrants at Rockville High School last Thursday. It was notable that County Council President Roger Berliner did not begin his weekly press conference by making a statement about the incident, which is foremost on the minds of county residents and parents. Only after being asked about the rape by a reporter, did Berliner comment. "Bad things happen," he suggested at one point.

Asked about the hot topic of why adults (the accused rapists are 17 and 18) are allowed to enroll as ninth-graders in Montgomery County Public Schools, Berliner endorsed the idea as a sound education policy for those with poor English skills.

In regard to the County's de facto sanctuary policies regarding citizenship status, a reporter asked if officials thought the incident should bring those policies into question now. Berliner disputed that idea in a puzzling way, asserting that the rape incident "reinforces why Montgomery County does what it does."

What was perhaps most troubling, was the passive, past-tense description of how the County would respond to the threat of serious crime, such as the gang rape incident. While most illegal immigrants do not engage in serious crime activity, Berliner said, "some of them do terrible things...and then we need to take care of it." In other words, our elected officials will allow a scenario in which we know "terrible things" will indeed happen, and then the County will "take care of it." That cannot be comforting to the victim of Thursday's brutal sexual assault in a bathroom at the school, who was allegedly gang-raped and sodomized. Wouldn't it make more sense to remove the criminal threat from the community and our schools before "bad things happen?"

Berliner went on to say the County does cooperate in limited circumstances with U.S. Immigration and Customs Enforcement (ICE) when the agency alerts them when prisoners in custody "have committed federal crimes." But just yesterday, Montgomery County was placed on a new federal list of jurisdictions that "limit cooperation with ICE."

"Is there some coddling [of illegal immigrants] here that might have contributed to this crime?" asked a reporter. Berliner denied that was the case, and claimed those being "coddled" by the Council are longtime residents, whose only crime is being "undocumented." "We're coddling, and I'm proud of it," Berliner said.
Posted by Robert Dyer at 8:15 AM