The alleged brutal gang rape of a 14-year-old girl at Rockville High School by two immigrant classmates last Thursday has likely doomed legislative efforts to formalize the existing sanctuary policies of Montgomery County and the City of Rockville. It's inconceivable that any elected official could press forward with that agenda item, now that the horrific details of that sexual assault were followed by word that at least one of the accused is an illegal immigrant who should have been deported - but mysteriously wasn't (shockingly, as of press time, the Maryland House of Delegates is expected to vote today on a similar statewide sanctuary measure).

But beyond the always-controversial immigration issue, the rape incident has exposed two additional security flaws at Montgomery County Public Schools. First is the question people across America have been asking on social media since the rape story went viral Friday: How did a 17 and 18 year old manage to get enrolled as "freshmen" at Rockville High School? And, second, how could Rockville High School and MCPS not have a home address on-file for one of its students? 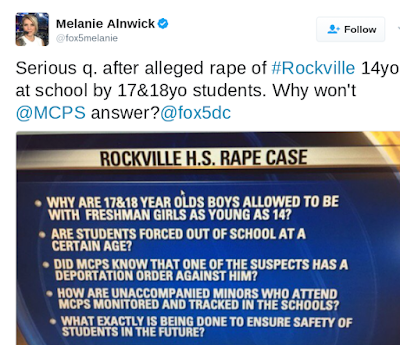 So far, MCPS is not revealing the details of how adults can enroll in regular 9th grade classes. Most illegal immigrants are working during school hours, so clearly neither of these gentlemen came here to work. Stunningly, MCPS and its bumbling superintendent were completely silent on a gang rape that occurred in their school four days ago until yesterday. But don't expect any answers, according to said-bumbling superintendent Jack Smith, who arrogantly wrote that "I know community members have many questions about this serious incident. To ensure we do not unintentionally prejudice an ongoing investigation, MCPS cannot provide any additional details about this specific case at this time." And we pay this guy's salary? There is no reference to the bathroom assault on the system's Twitter feed, even as parents have pressed for answers on social media all weekend. 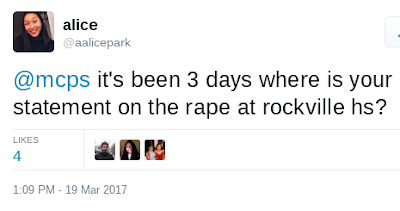 Equally troubling is the fact that Rockville High School and MCPS could not provide Montgomery County police detectives with the home address of Jose Montano. The official police press release described Montano's residence as an "unconfirmed address." Yet a home address was readily available for Henry Sanchez, the 18-year-old illegal immigrant who has only been in the country for seven months.

How many other students does MCPS not have a home address for? How many students are illegally attending schools outside of their actual school cluster, because MCPS is not verifying their home address? Is this part of an exceptional process that applies to undocumented immigrant students? Because I have a hard time believing that an actual legal resident living in Aspen Hill would be able to enroll at Walt Whitman High School without proof of a current address in the Whitman cluster area.

So many questions, for a school system already found to have extremely-lax cybersecurity (including personal student information), and - as we found during recent vandalism incidents - a lack of security cameras on its campuses.

So many questions about how this devastating crime was allowed to happen, yet none of them are being asked by the elected officials whose policies actually did allow this rape to occur - the Montgomery County Council. Constituents took County and Rockville City Council members to task for their silence, which was deafening this past weekend.

Just this morning, the Washington Post is reporting that MS-13 gang kingpins in El Salvador are sending additional gang members north, specifically to Montgomery County, with orders to increase the gang's power in our county. This is serious business, especially in a county where our political leaders have so far claimed we don't have a gang problem. And Montgomery County has now earned the dubious distinction of being the only jurisdiction in our area where two underage girls have been gang-raped by illegal immigrants in a single year. Last April, two illegal immigrants living at taxpayer expense in Montgomery County public housing in Wheaton were arrested for kidnapping and gang-raping a 12-year-old girl.

Both of these girls were let down by our elected officials, and our school system. It's a disgrace. Silence is not the answer.
Posted by Robert Dyer at 8:25 AM