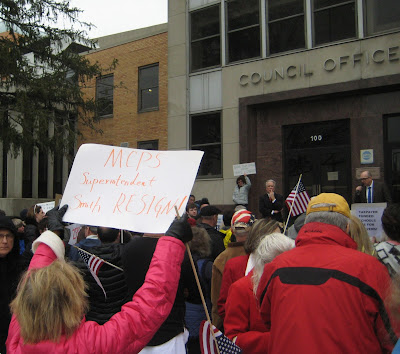 Hundreds of residents gathered in front of the Montgomery County Council Building in Rockville yesterday to demand elected officials and MCPS be held accountable for their roles in the alleged gang rape of a 14-year-old girl at Rockville High School. Protesters held signs demanding MCPS Superintendent Jack Smith resign, and against Montgomery County sanctuary policies that allowed the girl's alleged attackers to live here and enroll in 9th grade despite being much older. The rape allegedly took place in a bathroom at the school on March 16. 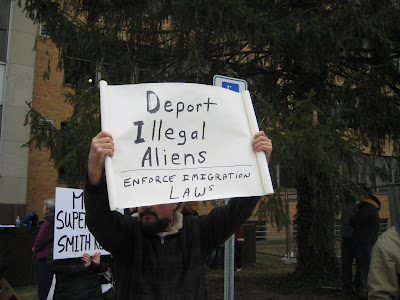 Speakers and notable attendees included Montgomery County Executive candidate Robin Ficker, Montgomery County Council District 2 candidate Edward Amatetti, and Brigitta Mullican, a Rockville resident who has been one of the leading critics of the effort to officially declare Rockville a sanctuary city.


CLICK HERE TO WATCH VIDEO: Rally highlights
A small group of less than 20 counter-protesters set up across Maryland Avenue from the protest, and attempted to shout down speakers throughout the event, despite lacking the numbers to do so. The poor showing was likely due to the fact that very few in the county believe the accused rapists should have been in the 9th grade. And to the mass outrage over the security lapses that facilitated the alleged suspects' brutal bathroom attack, during which they allegedly repeatedly raped and sodomized the victim, as she screamed for help that never came.
In a speech to the crowd, Ficker ripped County elected officials and MCPS for their mishandling of the Rockville H.S. rape, and of crime in their schools in general. Ficker cited recent reports of violent crimes that occurred at the school just weeks before the gang rape, and were covered up by administrators. In one, a girl was beaten and kicked in the head three times, he said - yet parents were never informed this happened. These were warning signs that should have resulted in tighter security weeks ago, Ficker said.

Ficker suggested the county move 9th grade back to junior high, and leave grades 10, 11 and 12 at the high school level, arguing that kids are being forced to grow up too fast. He noted that, while Rockville H.S. had more than 100 security cameras, no one was monitoring them.

Amatetti paused during his speech to ask the crowd to "pray real, real hard for the young, brave girl" who was the victim in this case. He said the school system and the county have "real problems" that need to be addressed.
The crowd was diverse, including Asians, African-Americans and Latinos. One attendee was overheard noting that the counter-protesters across the street were whiter than the crowd they were counter-protesting against. 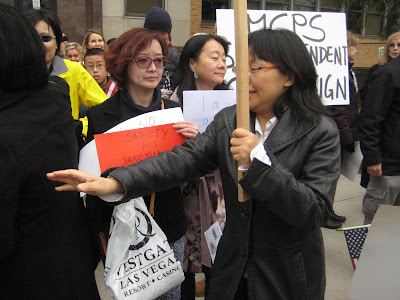 Several immigrants who had legally achieved citizenship through great effort and cost, or were seeking to do so legally, decried the county's effort to give those who haven't followed the rules special status. Lucas, a resident of Kensington who did not wish to give his last name, said he has been in the U.S. for 3 years on a student visa. Now he has applied for citizenship, and has been told the process will take 3 to 5 years. It's "unfair," he said, for those who broke the rules to gain the rewards of citizenship in Montgomery County before those who play by the rules. 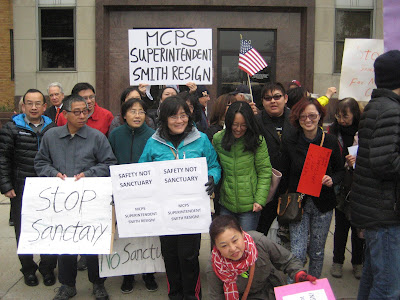 Mullican called it "unfair for the legal immigrants who waited their turn and came here through the system." She emigrated legally to America from Germany with her family in 1956, and had to wait until 1968 to become a citizen. "I understand the immigration process, and the privilege of being a U.S. citizen," she said.

Several attendees carried signs demanding the resignation of MCPS Superintendent Jack Smith, Smith has so far declined to comply with the growing calls locally and nationally for him to step down. He has gained national notoriety for seeming more concerned about immigration politics than about the rape victim. Smith "speaks far more harshly about xenophobia than he does about sexual assault of a child," said Fox News anchor Tucker Carlson. 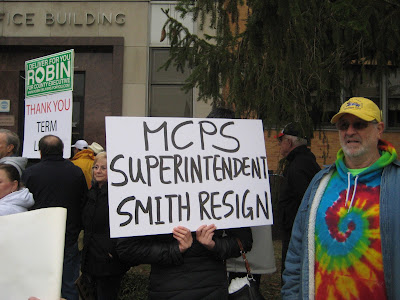 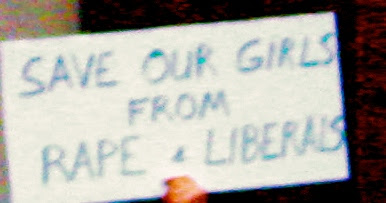 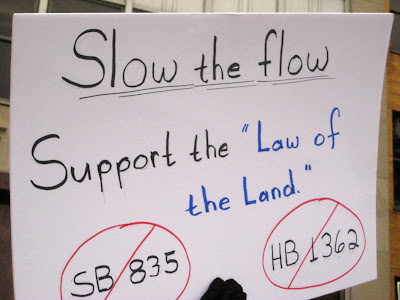 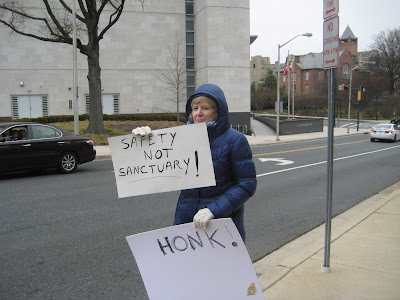 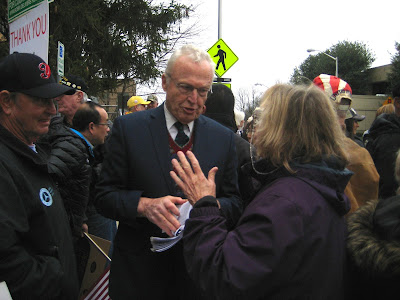 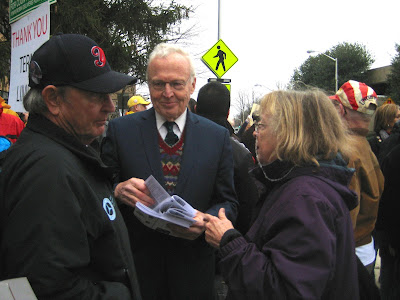