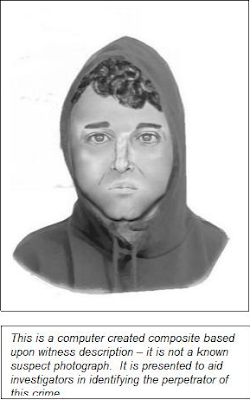 Montgomery County police have released a sketch of the Montgomery Village rape suspect, the latest incident made public as reports of rape continue to surge in the County. Detectives report that the white male suspect followed a woman after she got off a Ride On bus in the 19300 block of Watkins Mill Road Saturday night, April 20, around 10:15 PM. Realizing the man was following her, the victim began to run. The suspect then knocked the woman down, dragged her into a grassy area by the nearby woods, raped her, and fled.

The victim went home, and then to a local hospital, where the police were called. She identified the suspect to detectives as a white male in his late 20s, with brown hair. She said he is approximately 6-feet-tall, and weighs about 180 pounds. The suspect also has a tattoo behind his left ear, and was wearing a sweatshirt and jeans. Based on the sketch, the sweatshirt has a hood.

Detectives are asking anyone who recognizes the suspect or who may have information about this rape to call the Special Victims Investigations Division at 240-773-5050.  Those who wish to remain anonymous may call Crime Solvers of Montgomery County toll-free at 1-866-411-TIPS (8477). Crime Solvers will pay a cash reward of up to $10,000 for information provided to their line that leads to an arrest and/or indictment for this crime.

Reports of rape skyrocketed by 53% in mid-2018, according to an official police department memo submitted to the County Council. Police recently reported that rapes had spiked 28% by the end of 2018. The County Council has been silent on the surge in rapes in Montgomery County, and their allies in the local press colluded to silence the topic during the 2018 Council election. I was outspoken on the importance of the issue during the campaign, and my words have been vindicated by the continued increase in reports of rape.

Wake up, folks! Public indifference, and the propagandizing Pravda-style media coverage of County government, are perhaps the biggest challenges we face. The people of Montgomery County need to avail themselves of the information being provided by this Suburban News Network website, start asking why the Council has failed to take action, and begin intelligently voting for councilmembers who will actually take the problem of violence against women seriously.
Posted by Robert Dyer at 7:45 AM