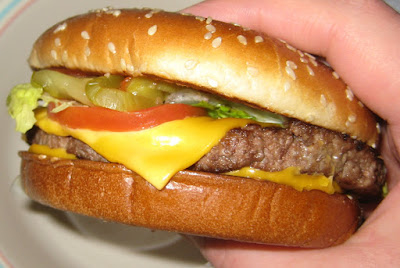 Second, it now features a freshly cooked beef patty. Patties were still frozen when the Deluxe was last on the menu.

Third, it features Roma tomatoes, almost unheard of for a fast food burger.

Fourth, and most importantly, they have added ketchup as a topping on the Deluxe. McDonald's hasn't offered a burger topped with both ketchup and mayonnaise together since the much-missed Big and Tasty. This gives the Deluxe a Whopper-style flavor.

Whole leaf lettuce, raw onion, pickles and two slices of American cheese round out the Deluxe toppings. At $5.99, it's mighty pricey for a single-patty burger, though.
Posted by Robert Dyer at 11:00 AM