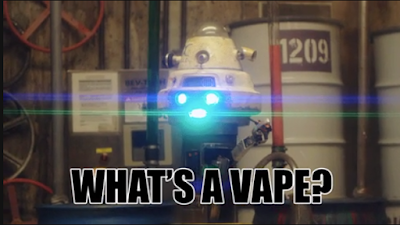 Would be third County economic sector
totally wiped out this decade after
food trucks, nightlife

The Montgomery County Council is poised to set a world record this fall - and it's not one to be proud of. Known for a record of economic failure, high taxes, jammed roads, failing schools and banning stuff, the Council is turning to that last font once again with a new vape shop bill and zoning text amendment package. To call it heavy-handed would be an understatement - it would literally require almost every single vape shop in Montgomery County "to close within 24 months." In doing so, the Council would destroy an entire sector of the County's economy - vaping and smoke shops - for the third time in a single decade, following their destruction of the food truck and nightlife sectors over the last eight years.

As usual, the Council is not on firm legal or logical ground. No resident should feel comfortable with the County in the hands of elected officials who would destroy a whole sector of the economy without even having a knowledge of the topic and industry they are "cracking down" on. If one did have a grasp of the basic facts, he would not be introducing a bill based entirely on hyperbole and panic generated by misleading media reports.

Vaping hysteria is suddenly and mysteriously sweeping the nation. If you believe many media reports, Juul users are keeling over by the dozens. Actually, that's fake news. The majority of "vaping deaths" appear to have resulted from people trying to use unauthorized THC vaping cartridges. THC is the primary active ingredient in marijuana.

Not a single person in Montgomery County or Maryland has died from immediate use of legal, nicotine vaping products. The Council laughably cites three students being hospitalized after "vaping on school grounds." Many, many more students have been hospitalized after using various other drugs on school grounds than that. It is currently illegal for minors to purchase e-cigarettes and vaping products. Why wouldn't the Council crack down on illegal sales, if the real concern was use by minors?

Predictably, no local media outlet is pressing the Council on its latest Draconian solution in search of a problem. Taxpayers will foot the bill for the lawsuits that are sure to follow passage of a bill designed to put specific enterprises out of business.

Once again, the County Council's hypocrisy and doublespeak has been exposed. They said we needed more millennials to move here. They've claimed for years that we needed to allow unlimited development of luxury apartments to attract those millennials. But the development they approve isn't within the price range of most millennials.

They claimed they would make us "hip," and launched the disastrous "Nighttime Economy Initiative" that ended up cratering the nightlife sector countywide, with eighteen nightspots closing in downtown Bethesda alone.

Finally, the Council deep-sixed what was a booming food truck industry by banning the trucks from public streets. Food trucks are a major draw for young professionals in urban areas - you know, the very people the Council said we needed to attract. What does the Council then do? Implode the food truck industry, with 96% of trucks either going out of business or fleeing back into the District, where many of them can be found at lunchtime just over the border in Friendship Heights, D.C.

It's as if the County Council wants to make sure Montgomery County's national reputation as a terrible place for young people and businesses is solidified for all time. Vaping is very popular among young adults. For better or worse, it is "hip," to use the Council's outdated dad-jeans lingo. So no housing, no nightlife, no lunchtime food trucks and no vaping for you, millennials. Enjoy your life in Northern Virginia - heck, that's where your jobs are anyway. Might as well live there, too! Wait, you already do?

And that's the real capstone of the Kill Vaping Bill. Despite record-high taxes, County revenue is down, and we are in a structural budget deficit. The Council has driven our economy into the ground over the last two decades, and has failed to attract a single major corporate headquarters in over twenty years. Ultra-rich residents have fled in droves, slashing tax revenues that were being provided by some of our wealthiest denizens, and shuttering storefronts up and down "Montgomery County's Rodeo Drive" in Chevy Chase. And the County's debt, if it were a government department, would be the third-largest department in the County government.

After passing a corruption-bloated, reckless and irresponsible budget in May - and raising taxes in the process - one of the major bond rating agencies sent out an urgent alert warning investors. That means our AAA bond rating is in danger of being downgraded. And just as a recession may be around the corner.

What are these folks smoking?
Posted by Robert Dyer at 11:49 AM