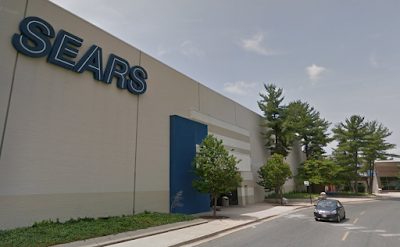 The Sears store in Gaithersburg will close by mid-December 2019, Sears/Kmart Public Relations Director Larry Costello confirmed to Suburban News Network, publisher of RockvilleNights.com. Located at Lakeforest Mall, the Gaithersburg store appeared on a list making the rounds of national news organizations, Reddit and Facebook groups, but the impending closure had not been officially confirmed by Sears until now.

Costello said a liquidation sale will begin mid-September at the Gaithersburg Sears and Stevensville Kmart stores. One Sears store in White Oak, and a Sears appliance outlet in Wheaton, will remain in Montgomery County after the Gaithersburg store has closed.
Posted by Robert Dyer at 8:00 AM