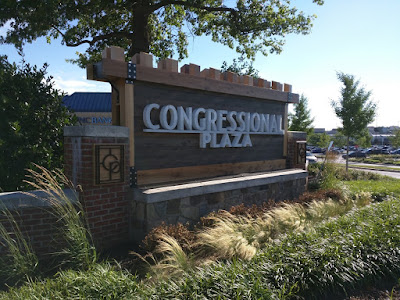 After losing several tenants, Congressional Plaza in Rockville has been adding new ones in spades. Orangetheory Fitness and CorePower Yoga are the latest two officially announced by property owner Federal Realty. Both fitness facilities will be part of a new section of Congressional Plaza they are branding as FITRow.

One space remains to be filled in the FITRow section, which will be next to the future Barnes & Noble bookstore in the north wing of the property. Federal Realty says it found success with its original test of the FITRow concept at its Assembly Row property in Boston. I can say there has been a huge response to the recent announcement of Orangetheory's future location at 7900 Wisconsin Avenue in downtown Bethesda, which bodes well for a warm reception in Rockville.

“FITRow is a lifestyle, a community where people have access to several boutique studios that can evolve with their fitness wants and needs,” Federal Realty Director of Asset Management Kari Glinksi said in a statement this morning. Orangetheory and CorePower will both open in 2020.
Posted by Robert Dyer at 10:04 AM