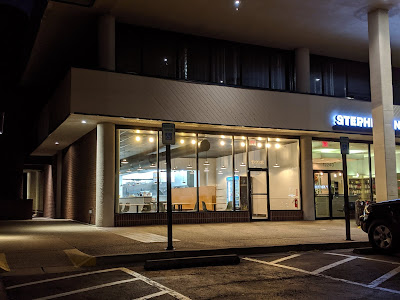 Katsu Go opened at 12238 Rockville Pike with big plans in May - and met with immediate success, capped by recognition in Washingtonian magazine as one of the best new budget restaurants in the region. That success led to the sudden breakup of the ownership group that launched the business just months ago, according to one owner, who said he and a partner were brought in to help launch the restaurant. Both men are now out, he said, and looking for a new Rockville location.

The Katsu Go sign has been removed from the front of the restaurant. But there were still customers dining inside, and steam rising from orders being prepared by staff, when I stopped by. Perhaps it has become like one of those cool bars that doesn't have a sign.
Posted by Robert Dyer at 8:47 AM