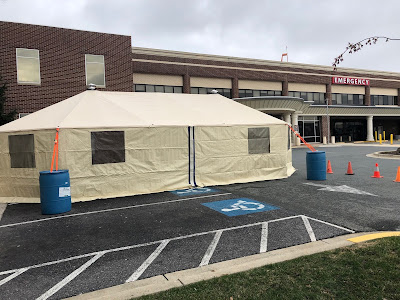 While the public is told that there are still only 24 confirmed cases of coronavirus in Montgomery County, coronavirus tent hospitals were suddenly erected Tuesday at hospitals across the county. County Health Officier Travis Gayles tried to get ahead of public concerns on this development, saying "don't be alarmed." He said the tents are simply triage centers so that potential coronavirus patients do not have to enter the hospitals' emergency departments, where they might infect others.

A shortage of test kits remains here and nationwide, and Gayles stressed that these tents were not offering testing services to the public. The tent hospitals were erected yesterday at Holy Cross Hospital's Forest Glen and Germantown campuses, Suburban Hospital in Bethesda, Adventist White Oak Medical Center, Adventist Shady Grove Medical Center in Rockville, and MedStar Montgomery Medical Center in Olney. It's interesting that none of the hospitals mentioned the new tents on their social media feeds yesterday.

Two notable aspects on the latest coronavirus numbers across the state: Montgomery County has by far the highest number of confirmed cases, many times that of any other county; the reason(s) for that other than population size would be worth investigating. Second, for a disease that appears designed to hit the senior population hard, the majority of current cases in Maryland are between the ages of 18 and 64. No cases have been confirmed among residents under the age of 18.

On Tuesday, Maryland Gov. Larry Hogan postponed the state's primary election to June 2, 2020. It's unclear how it will be any safer or healthier for the public to go out to vote that soon, and many are speculating that Maryland could be forced to institute a vote by mail election. In fact, the special election to fill Elijah Cummings' Congressional seat will now be conducted by mail, so stay tuned for election developments that effect us here in Montgomery County.

More businesses are closing due to the pandemic. Paul Bakery and bluemercury in Bethesda, and all Macy's stores in Montgomery County, were among the latest on a sober St. Patrick's Day. Macy's announced it would reopen at the end of the month (again, highly unlikely, as with schools and businesses - all indications are that we will be in a much worse, not better, situation by then).

Target is reducing hours at all Montgomery County locations and nationwide. The big box store, Whole Foods Market, and Safeway were among those promising to institute times of the day during which only seniors and people with certain health issues may enter the store beginning this week.

The "senior hours" idea had been promoted heavily online in recent days by social media influencers, but it's unclear how effective it would be in preventing the spread of coronavirus, since those same people could carry it into the store anyway. Seniors are in the second-largest age group among current coronavirus cases. In practice, it may simply force the rest of the public to cram into more crowded aisles during increasingly fewer store hours, creating more stress and more spread of the disease. Not to mention shutting out folks from the small restocked amounts of hard-to-get supplies that people are hoarding like toilet paper and disinfecting wipes.

Sometimes people need to think before enacting a knee-jerk policy just because it sounds woke. Here's an idea: Retailers and suppliers actually restocking supplies, and operating on regular hours, instead of trying to add to the panic and hoarding. Imagine people not punching each other over a pack of Charmin because, after the initial supply shock, trucks would start rolling and it would be restocked in sufficient supply. Perhaps the paper companies have found a novel way to make money without selling their products. Heckuva job, Brownie!