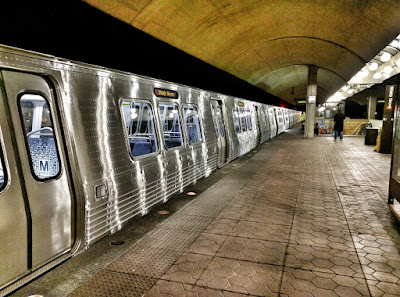 MoCo Council, Rockville leaders
wall themselves off from public
as COVID-19 spreads

Ridership of the Metro subway system and patronage of Montgomery County businesses plunged Thursday and yesterday, according to data from Google. As the week ended, the Montgomery County Council voted to bar the public from their building. The Council will continue to legislate and hold meetings, but their constituents will not be allowed to enter the Council building, sit in on those meetings or testify at public hearings. A long-held fantasy of the Montgomery County political cartel has now come true - citizens may now only email comments, meaning feedback will have virtually no public impact or reach to galvanize any resistance to Council moves.

The City of Rockville did the same, also barring the public from City Hall, meetings and public hearings. Gaithersburg canceled Mayor & Council work sessions, and meetings of other city bodies like the Planning Commission. Gaithersburg leaders did not officially bar the public from City Hall or their meetings, but are encouraging citizens to email comments and rely on live tweets from what will be streamlined Mayor & Council meetings on only the most pertinent city business for the time being.

Federal and state governments have not yet taken the likely most-effective step of closing all businesses except grocery stores and pharmacies, unlike some other countries. But many people are - wisely - staying in their homes anyway as much as possible.
Google real-time data showed Metro ridership on the Red Line at the Bethesda station was not even half of the average for Thursday and Friday evening rush hours. The Google data also showed patronage of restaurants and retail centers continuing the dramatic slide first reported here earlier this week.

Woodmont Grill, which has the largest volume of sales of any downtown Bethesda restaurant according to industry insiders, seemed the least hurt of any Montgomery County dining establishment. But patronage at Red Robin in Germantown was less than half what it would usually be on a Friday evening at dinnertime, according to Google's real-time count.
Traffic at Westfield Montgomery Mall was down about half last evening according to Google. Ellsworth Place mall in downtown Silver Spring was faring better, with traffic only down about a third. Silver Spring seemed to be slightly more insulated from the coronavirus panic, as even the Regal Majestic IMAX cineplex was still mustering about a 60% turnout - much better than the scenes of empty movie palaces being shared by brave moviegoers on social media Friday night.

Officials are protecting themselves, but whistling past the graveyard in not taking further steps to stop the spread of coronavirus. Because so many have not been tested, and because the precise nature and scope of the virus' spread in the region is not yet clear, these same officials will likely be caught short by next week when the total number of infected residents could well skyrocket. The general consensus of the Montgomery County cartel that this will somehow be a "two week" pandemic is almost certifiably nuts, as was the Maryland House voting to ban plastic bags in the midst of a world health catastrophe. This is the last time you would want people reusing dirty bags in public places or their own homes.

To add insult to injury, just as homebound residents turn even more heavily to streaming services like Netflix for some diversion, our corrupt elected officials quietly moved their Netflix tax forward. If passed - and if Gov. Larry Hogan's veto is overturned, Montgomery County residents would have to pay a tax on each of the many streaming services they subscribe to.

Some of our elected officials need professional help, folks. Or at least a clue.
Posted by Robert Dyer at 8:00 AM